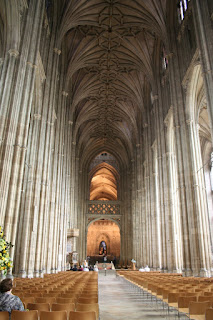 Yes, I did Chaucer's pilgrims one better and actually got there. And it was amazing, beautiful, horrifying.

I can't quite believe how much I've enjoyed the three big churches I've visited so far, each so different.

Canterbury. Well, I have to say, I love a good story, and the history of Canterbury is absolutely full of them. I learned about St. Augustine of Canterbury, and Queen Bertha and King Ethelbert and the founding of the English church at Canterbury. (I totally think Prince Charles should choose a really good name like Ethelbert of Ethelred should he become king. He should NOT become George VII. And you can tell him I said so.) 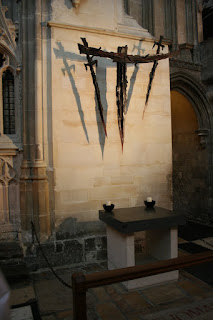 Among the most famous stories associated with Canterbury is the assassination of Thomas Becket. Becket's stuff was all destroyed during the reformation (boo hiss!), but this modern altar and sculpture was put in the place where he was said to have died. The art piece represents the sword that got broken in killing him, and also the side ones (with shadow) represent the four swords, and then there's the cross imagery, and it's all jagged and violent. 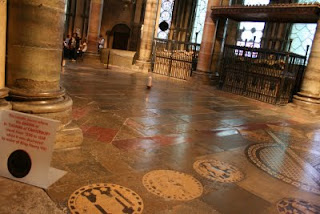 After Becket's death and such, the Cathedral built onto the east end, for a shrine, called the Corona Shrine, since one of Becket's relics was the crown of his skull. (I saw a piece down in the treasury that has a bone fragment that the label says MAY be a fragment from Becket. It was miniscule.) The candle in this picture marks where they think Becket's shrine was, before the breaking up. If you look carefully, you can see there's a sort of dip worn into the floor. The guide said that was from pilgrims. And beyond, you can see the grave monument of Edward the Black Prince (the one on the right). 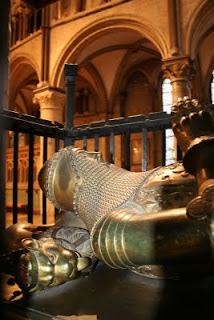 I became fascinated with Edward the Black Prince when I took my first Chaucer class and learned a little about him as a culture hero. So it's pretty darned amazing to me to see his monument and his achievements. It amazes me to think that things survive from 1376. 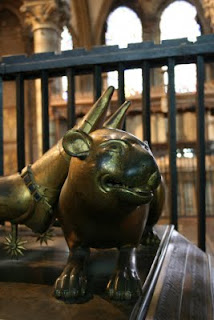 Here's the creature under Edward's foot in the monument. I would guess it's supposed to be a dog, since guinea pigs are from the Americas. 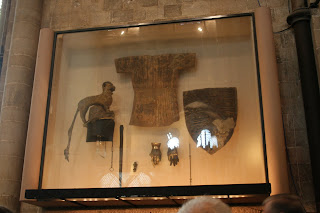 Here are Edward's "achievements," stuff he supposedly carried. Amazing that it's survived. 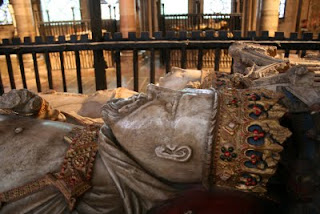 After Edward, we get to Henry IV. My "knowledge" of history is overwhelmingly informed by Shakespeare, so I tend to think H4 is a jerk. And Richard 2 spoke just amazingly beautiful poetry, even if he was a schmuck as a king.

But, of course, Shakespeare was writing great drama, and not history or historiography, so R2 was a lousy king, and probably didn't even speak fluent English for all I know. (I've read that Henry 5 was the first Plantagenet king to speak English as his first language. Anyone know?)

At any rate, Richard was Edward the Black Prince's kid, and Henry 4 was Richard's cousin, and Edward's nephew, so one of the stories the guide told as possible was that Henry had wanted to be buried across from Edward as a sort of penance for killing his son. (Richard is buried in Westminster, on the edge of Edward the Confessor's chapel. Been there!) 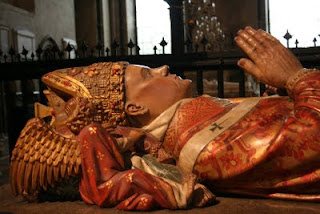 The stories don't end there, though. Down towards the nave a bit, just before the choir area, there's on one side, the tomb of Henry Chichele, and on the other, looking at it, the chair that the arch-bishop of Canterbury sits in when at services. If you're like me, you're thinking Henry who? And that, my friends, is why it's always good to chat with the local docents and guards. 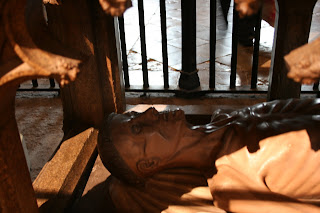 Do you remember the opening of Henry 5, where the Archbishop of Canterbury and the Bishop of Eli are planning how to set Henry up as the heir to France so that he'll go to war and then won't get all tax-hungry at the church? Well, Chichele would have been THAT Archbishop of Canterbury. Except, according to the stuff posted at the Cathedral, he couldn't have been at that particular council (so it's not his fault). He was, however, at the Battle of Agincourt, and was so horrified by it that he started All Souls College at Oxford in part to pray for the dead of the conflict with the French, which, according to the guide, is responsible for taking care of his tomb.

This second picture is from the lower bunk of his tomb, the momento mori part, that's supposed to remind us of what we'll become, even though we get to dress all fancy in life. And that's supposedly the point of sitting the current Archbishop of Canterbury (at whatever time) across from this tomb, so that he'll remember what's really important, and not get all nasty. 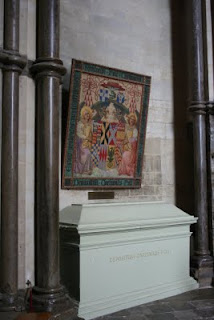 That takes us through the middle ages, but there's one more great story here. Have you been watching the TV show The Tudors? I've seen two episodes now, on late night TV here, and coincidently, last night's late episode had Henry sending an emissary to France to try to get Reginald Pole arrested and returned to him, since he'd rejected Henry's pre-eminence in the church and run away to France. But then Henry died, and so did his son Edward, and guess who came to the throne? That's right! Queen Mary! And Mary was Catholic, and guess who became the new Archbishop of Canterbury! Reginald Pole! And he's buried here, too, having died a few hours after Mary herself (which was lucky, because Elizabeth would have treated him horribly, I'm guesing). 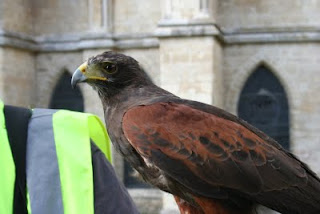 Here's a bonus! It's a Harris Hawk (an American native, but popular for falconry). Did you know there's someone who's official work involves scaring off pigeons around Canterbury Cathedral? Well, there is, and this is his hawk. Coolness! That's something you won't see on just every tour!

As I was getting towards leaving mode, a choir came into the Cathedral, and went into the choir area and started practicing. So I sat in the nave for a while, just listening. The choir area is behind this huge screen thing, and the building is massive, and yet, the music was beautiful and clear. I sat and tried to imagine what it would have been like to attend a mass and hear the monastic choir singing in Latin and such.

So I stayed for the Evensong service, which was held in the upper area, which meant we were sitting in the area where (I think) monks would have sat back in the day. It was pretty neat, and beautiful. I've now been to more church services (2) in the past month than in the past er, well, a long time.

I don't know if it's a new thing or not, but the Church of England seems friendly and inclusive, much more than I expected.
Posted by Bardiac at 5:03 PM