I know I sound like the most stereotypically crazy tourist, raving about this and that. I'm going to sound even more like that today. Today, I visited St. Paul's Cathedral. Now, I chose to visit Westminster Abbey first, and that probably suggests something about my taste. I chose the medieval church over the late 17th century one. I wanted to see where all those kings and Chaucer, Spenser, etc. are buried, before where Nelson or Wellington are buried.

And Westminster was amazing, and beautiful, and moving. And so is St. Paul's, though in totally different ways. St. Paul's feels open and huge, but somehow not overwhelming all the time, until you stop and really look up.

In a way, there are two big sections to St. Paul's. The west part is less decorated, maybe neo-classical feeling. And the east part (from the dome on through the altar and chapel areas) got mosaics in the Victorian era. The mosaics are beautiful, but so very unnecessary. What I mean is, the west part looks clean and almost simplistic, but not. The walls are white, and the windows clear, and light, and the dimensions feel perfect. And then the mosaics got put in on the west part, and I can only imagine the loss of that feeling of openness and light. But I guess the Victorians thought it was way better. Here's a link to a picture, so you can see what I mean.

Even so, it's all beautiful. I went on a tour, so I learned some about what's where and why, and I always enjoy that. The tour guide showed us the American Chapel, which was put up in the repair of the east part of the Cathedral after WWII's damage.

One of the sad things about the Cathedral is that it pretty much burned in the Great Fire of 1666. Thus, the graves of people such as Philip Sidney, John Donne, Christopher Hatton, and lots of other early moderns were destroyed. Somewhere under there, I guess, is Sidney.

And that, of course, brings me to thinking about the whole tourist, getting to the "real" bit. I don't actually want to get TOO close to Sidney's grave, but I missed the sense I had at Chaucer's memorial, that he was somewhere very close, and Spenser, and Elizabeth, Henry Frederick, etc.

There are more recent gravesites and memorials, mostly in the crypt, and dominated by Wellington's and Nelson's. (It's amazing how BIG Nelson and Wellington must have been in the early 19th century. I can't imagine a military leader that big, maybe Churchill or Roosevelt?)

The highlight, after Donne's memorial (which survived, though not at his grave), was the climb to the Galleries. There are three galleries. The first and lowest is inside, and called "The Whispering Gallery." Then you walk up more stairs and get to the first outside gallery, called the Stone Gallery. And finally, you walk up more stairs and get to the highest gallery, called the Golden Gallery. Here's a link to an outside picture of St. Paul's dome. Take a look. You can see the area with the white stone railing around just below these little square windows. That's the Stone Gallery. At the top of the dome part, there's another area with a wrought iron looking railing, and that's the Golden Gallery.

You're not allowed to take pictures inside the Cathedral, but you are from outside, so I did. And here are a few! 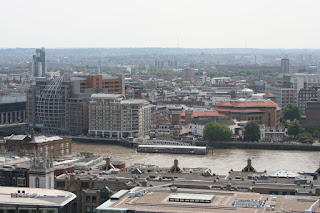 From the Stone Gallery, here's a look at the Globe reconstruction (hey, Shakespeare has to get in here somehow!).

You want to see some stairs, don't you? 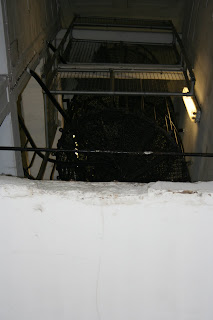 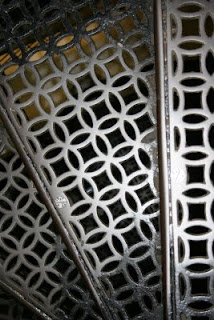 And some more stairs, this time looking down. 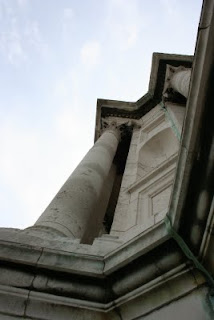 And here's a shot looking up from the gallery.

From St. Paul's, I went to the Museum of London, but I was tuckered and my feet were tired, so I didn't get as much out of it as I would have it I'd done things the other way around. (On the other hand, I would have had a harder time with all those stairs, probably?)
Posted by Bardiac at 1:47 PM