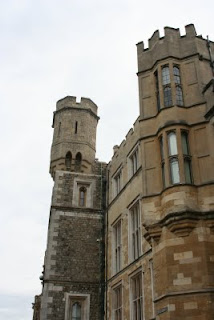 I went to Windsor Castle today. I texted the Queen so she'd know I was coming, but she didn't answer. I went anyway, and it was well worth the visit.

It's an impressive castle. It's almost fairy tale impressive. I went through the state rooms, which are impressive. I can't even imagine living a life where I went into those rooms as a participant (rather than as a tourist). (I'm much too uncomfortable with formality to think of such a life fondly.) 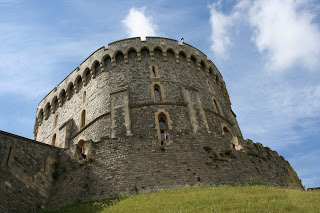 I went up to the Round Tower. As you walk up the entry stairs, you face straight into a 17th century canon that sticks through a hole in the wall. The idea was that if people were storming up, that canon would get off one shot as a deterent. It would deter me. The Round Tower, as you know if you've been there, isn't round any more because it was damaged during a seige and then by subsidence.

Windsor suffered two major seiges, both while occupied by John (once as prince, once as king). I was surprised to learn that it was controlled by parliamentary forces during the civil war.

I had a great day. When I was entering, the woman at the ticket counter figured out a way for me to be able to go on a Round Tower tour and a Kitchen Tour, even though I'd gotten there a bit late in the morning. Before the Tower tour, I went through the state rooms, and between the tours, I went through the moat garden, which is just beautiful. If I were a resident, I'd want to visit there every day (with good weather). It's unexpected, at least I didn't expect it, that there'd be this lovely gem of a garden right in the middle of this warish structure.

My Kitchen tour was scheduled for 4pm. When I went up, it turned out I was the only person who'd bought a ticket for that time, so I got a personal tour. It's fascinating. You get to go under St. George's Hall (which you get to see on the state rooms tour). St. George's Hall is near where the 1992 fire started, and which was seriously damaged in the fire. The guide showed me places where the stone walls were still drying out, even now. And he also told me about the area where we were, which had been mostly storage areas, semi-blocked up, before the fire, but which were restored to show the 14th and later walls and such, and made into this one beautiful room with vaulted ceiling, and corridors and such. In a way, the fire provided the impetus for some serious exploration of that area of the castle.

We also saw the main kitchen(s) used to prepare state meals when the Queen entertains heads of state and such. The main kitchen has this huge vaulted wooden ceiling, which was damaged by the fire. And the damage meant that archaeologists got to do the ring-dating on the wood, and discovered that the ceiling was built during the 14th century, and not later, as had been thought. It's utterly amazing to me that a ceiling built in the 14th century could still hold up after all this time. (There are still original timbers in use, where they could use them, and otherwise they put in new timbers.)

It was a great tour, with a wonderfully informative guide.

Since it was Sunday, the Chapel of St. George was closed except for services. So, as seems to be my habit, I stayed for evensong.

I went in, and we were seated in the Quire (choir) area, in the stalls of the Garter knights. How cool is that?

Before the service, I read some of the little metal plates at the back of my stall. I wrote down the few names I could make out.

Yes, so I was sitting in a stall associated with THAT Robert, Earl of Leicester. (I don't think the stall plates indicate that the stall was actually that knight's seat.)

I'm sort of clueless about garter symbolism. Most of the stalls had a big crest and such associated, with a helm thing (or crown) and such. But three (I think) that I counted on the far side had carvings of heads only. I don't know quite what that means. And several spots seemed "empty."

On my side, just down the way a bit, I recognized what I thought was the rising sun on a banner, which would be the banner of the Emperor of Japan (if I'm right about the banner and such).

And that was my day at Windsor. I didn't get to visit the various grave markers of Henry 8 or the others buried at the Garter Chapel, nor did I go to the mauseleum to visit Victoria and Albert.

I've come to the apartment and am watching the television broadcast of the fall of Tripoli. Amazing. (Of course, we won't actually know how things work out yet. Still, amazing.)