I bought an umbrella today. Yes, it's rained after 10 days. So I've had ten beautiful days. And I spent most of today at the Victoria and Albert (fantastic, more on that in a bit), so I wasn't in the rain anyway.

It's been warm and beautiful here. And I've been riding subways. I love subways. I probably wouldn't if I had to commute every day for 20 years, but I don't, so I do. But they get a little warm in the warmth.

What I've noticed with the warmth and the subways: I sweat. I feel the sweat dripping down the side of my face. My back is sometimes totally wet from carrying a backback (becaues I am SUCH a tourist).

And I am the only person on the subway who doesn't look freshly showered and powdered. It's amazing. I'm in a light shirt and light slacks, and there are people in wool suits and such, and they look totally fresh, and I'm dripping sweat. (I don't usually sweat in extreme ways, so far as I've noticed, and I don't think I'm having a hot flash every time I get on the subway.)

Another observation: I'm trying to figure out how to get myself some places, and figuring out train schedules is just not easy. What I'd really like is a schedule on line that looks like an old schedule, giving times when the train leaves such and so station, and so on, in a row, and then columns of trains, so it's a whole table, and you can figure out when you want to leave, and how often trains come and so on.

Instead, I've been trying to figure things out through this official site, and you have to put in when you want to go, and which station, and so on. But how do I know which station a train to MysteryCity uses?

I THINK I've sort of figured out how to get myself to Canterbury. If so, I'll go there tomorrow. If not, I'll find out, and go somewhere else or something. 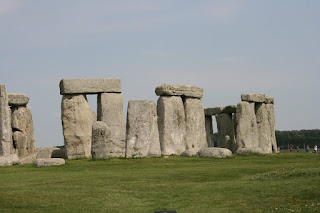 I did make it to Stonehenge yesterday, by taking a tourist thing. It was okay, but not fabulous. I'm slow looking at stuff, and we had been held up by traffic, so I didn't get to just stand and stare long enough.

And to be honest, I think I was expecting something even bigger. Then one of my friends commented on fb about This is Spinal Tap and now my brain is sort of stuck there. Anyway, I'm sharing a stereotypical tourist picture I took.

Several folks have recommended the Victoria and Albert Museum as one of their favorites, so today I went. And I have to say to all those friends, you were right! It's a marvelous museum! I spent a ton of time looking at the sculptures and all sorts of medieval and early modern stuff.

One of my tricks when I go somewhere is to ask the local guard at a museum what their favorite thing is. Sometimes, you get great ideas. Today, the guard I asked said I shouldn't miss the ceramics. (It's a hit or miss thing, what can I say?) So after I'd wandered through what I really wanted to see, I headed up to the sixth floor on a lift (I'm down with all the lingo, yeah, like that.)

Now, when I think of a ceramics display in a museum, I'm thinking of something like what I saw in Japan, where there's a piece in a case with a description talking about the glaze and such.

Or maybe something like in the British Museum, where there are ancient Greek pots, and there's a little description of each, talking about black figure or red figure and so on.

That's what I'm contemplating as I ride the elevator up.

I got out of the elevator, turned, and faced these two IMMENSE floor to ceiling cases running in the center of the room, with equally large cases on the outer walls of the room, filled with ceramics like a nightmare of what you wouldn't want to have to dust. And that was the first room.

It was overwhelming. That's not to say some weren't stunningly beautiful, but mostly it looked like everyone's imaginary Victorian grandmother's fantasy china and kitsch pieces had gotten together and bred wildly. There were tea sets and figurines, and blue on white, and so on and on, for three or four rooms (I got lost among the rooms).

All I could think was: someone had to dust around those before they became museum pieces, and I'm really glad it wasn't me.

And then of course, I thought: EARTHQUAKE!

Did I ever tell you about the cow creamers and the earthquake?

When I was a little kid, my Mom had a cow creamer (usually it's a cow shaped ceramic piece with a hole in the back for putting milk/cream in, and a hole in the mouth to pour the milk through, and a tail curved into a handle) that had been a great grandmother's. And so, of course, she loved this, and I loved it, and somehow, she began to collect a few cow creamers. She had about 15 maybe, and decided she was done, and wanted to be able to display them. There was a blank area of wall in the kitchen, so she determined that there were no wires behind it, and decided to knock the wall out and put in a little niche.

So one morning, she put a hole in the plasterboard, and discovered that there were wires behind it. Oops. But then she rewired around, and built the niche, all before my Dad got home (because he would have said "I told you so" or something). Then she put in glass shelves, and on the glass shelves she put the cow creamer collection.

I know what you're thinking, but that's because you probably don't know my Mom. When she put each cow creamer in place, she glued it down. And she fixed the glass shelves in place.

And when the earthquake came, and it did, she lost one cow creamer, and nothing else in the house. (Yay for earthquake preparedness!)

I'm putting the Victoria and Albert (along with the Tower and British Museum, so far) on my list of places to visit again. It's just that good (and that big! I didn't see nearly all of it!)

Am I boring everyone?
Posted by Bardiac at 1:40 PM