I don't know why I haven't been in more of a hurry to go to Stratford-upon-Avon, but I haven't. I really like Shakespeare's works, after all. They blow me away. But I guess I'm suspicious about the way it's a fandom or something? Or maybe I feel inadequate because I'm lousy at quoting passages (and I know people who don't do lit studies at all and can quote long passages)?

But anyway, yesterday was the day.

Usually, to get to S-u-A from London, you go to the Marlybone station and get on a train to Stratford. At least, I think that's what happens. My guidebook (which I'm liking less and less, alas) tells me that Chiltern offers direct service from London, Marlybone.

However, right now, there's major train infrastructure work going on, and Marlybone station is closed. Not to worrry, though, because there's a sign there, so that I knew where to go when I'd taken the subway to Marlybone: back to Paddington.

I tried to buy a ticket at the machine, but I got confused. (I feel incredibly inadequate about buying tickets at machines, but I did buy my Oxford ticket and have reloaded my Oyster card, so I'm learning.) I went to a ticket counter, and she first said it was 25 L (pretend that's a pound sign), but then said no, I had to go through Birmingham, and it's 40 L.

I got on the next train to Birmingham. Take a moment to look at a map.

The train to Birmingham wasn't, let's say, an express. No. It stopped at every little station along the way, pretty much, even the ones that were too small to have anything more than a platform, a ticket machine, and warning signs about stealing. At least I got to see some scenery, though, right!

At Birmingham, I waiting for the next train, and asked the ticket guy (who wasn't very busy) about return trains, and learned that the last return train leaves at 8:06, and that there are trains for London, Paddington every half hout through the day at 6 and 36. Okay, so that's easy.

I got on the train to S-u-A, and off we went. You can tell some of these are extra small stops because some of them are "request" stops. Someone has to ask the driver ahead to stop there. And we stopped at all of them.

It took almost four hours to get there instead of the usual 2.

But then I was there. Yes, there I was. So I started walking for the church to see the burial site. Along the way, I saw the Hall Croft, one of the houses that the Shakespeare Trust has, so I went through that (very interesting) and got a Trust thing for the houses in town, and a handy map of the town.

I went on the church, and was lucky enough to get there between weddings (because, duh, summer Saturday!), and went and saw the monument and grave marker. I guess I hadn't quite understood. Usually you see pictures of the monument, and some comment about the nearby grave. But the grave marker is one of four family grave markers on the floor, in the usual slap of stone with cut inscription way, and they're right up near the altar.

I like the way the church tries to balance between Shakespeare stuff and itself as a living part of a living community now. So they have these two part displays, one about Shakespeare (his baptism, marriage, burial) and the other about how important this is in the community life of the present church.

I didn't take pictures inside the church. We've all seen pictures, right? Maybe I should have taken one of the grave marker.

I walked on, and saw that the King Edward VI school was open for the day, and giving tours. That's the school that Shakespeare may have gone to, given that it was the only grammar school operating in the area at the time, and his father was one of the town guild guys who were associated with the school. So I donated 2 L to go on the tour, given by a student. 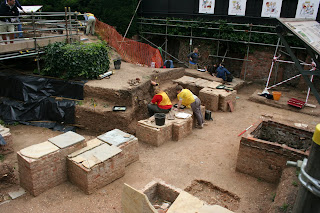 And then I walked on and went to Nash House and New Place. They're doing an archaeological dig at New Place right now!

Shakespeare had the house built after he'd inherited the Birth House from his father and had made a boatload of money from the plays and being a sharer in the company. You really get a sense of how much money he'd made from the comparative size of New Place and the old house, which was still a pretty decent size. 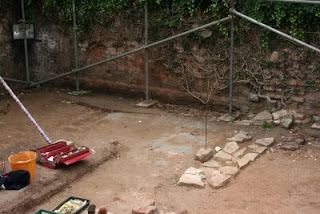 Anyway, New Place had had a medieval structure, and then the Shakespeare structure, and then someone had decided to tear that down and put up a Georgian (I think), and then that got torn down, and now, archaeology! In this picture, the gray area in the middle is supposedly the medieval level floor. Below that, they've found regular soil and no more good stuff.

I was disappointed in the Trust exhibit, I have to say. It was way too "crowd control" and way less "look at this and learn something." Maybe that works well for most people. Anyway, you go into this area, and there's a little film thingy, and it tells you about Shakespeare a bit. And then when it's done, and door thing opens, and you're allowed to go into the next area, which also has a film thingy. Some of them have displays. But the areas are dark, and the displays are covered so you only really see them while the light is on them. So you get maybe a minute to look at the First Folio copy they have. Maybe that's enough for some people?

But the film thingy means that everyone gets the same bit of information, and that you can't read a bit more for more information. And I didn't find the information they gave sufficient to give context for what I imagine regular folks would really appreciate (and I've taught for a long time, and have some clue about regular folks, I think). 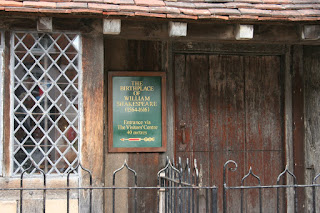 The house, on the other hand, is cool. And all along, in all the houses, the guides are great at answering questions and providing information. I love the museum guides I've run into. One good question gets them started on interesting stuff, but not too much.

And that was my day in S-u-A. It was almost five when I finished at the house, so I took a taxi (my first, and not a regular looking London cab, alas) to the train station (it would have been a do-able walk, but I wanted time to buy some food).

I enjoyed Stratford more than I expected too. It's cheesy, sort of like Ashland, Oregon on steroids, but also less high-falutin' and more a community feel with the church and the school as part of things.