I went to Kensington Palace today, but not very directly. I started with a look at the book and tube maps and decided to get on the Bakerloo line south to Oxford Circus and transfer there to the Circle line and get off at Notting Hill Gate.

That much went well. I got a little lost around Notting Hill, but that's partly because I was having such fun in the neighborhood. It really felt like a neighborhood much more than where I live does. There were interesting looking stores, ones that look useful for living in an area, rather than just convenience type stores to pick up a quick something on the way from the station, which is what's mostly around Paddington.

I should have had a clue, because just a stop or two before Notting Hill Gate is a stop called Lancaster Gate. But, as usual, I'm clueless.

I finally made it to Kensington Gardens, and stopped for some food. And then I needed a restroom, because life is like that, so I followed a sign that said a restroom was 750 meters on. And when I found the restroom, I realized that I recognized the area, because it is right near Lancaster Gate, which is one of the gates close to where I am living. Yes, like two blocks away close. Duh.

Much relieved, I walked back to the Palace and used my year membership thingy to go on in.

Now, I've been to a number of palaces before, not only in the UK, but in Japan, so I have some ideas about what touring palaces is like. At a usual palace tour, you learn something about the building of the palace, and what important people have lived there, and what important events have happened there. Then you admire the architecture and the art.

This is unlike my ideas. It's not bad, just different.

You see, this is a special display becuase they are doing major work on the palace, so they've done this special display, and you can tell they've put a huge amount of work into it.

They have this handout at the start, and the idea is that as you go through the room displays, you'll read what's there and find seven princesses. And in you go, to a somewhat darkened room labeled something about being the room of tears.

So I immediately think, was Anne Boleyn a princess? No. How about Elizabeth, the Winter Queen! But no, it's someone named Mary. Yeah, no, different Mary, this one is Mary II, and I realize that makes sense because James II had started the building of this palace, so of course they'll focus on recent history. (Well, recent for some of us, anyway.)

But why was Mary II crying into all these lachrymatory? She was queen for gosh sake, and H8 was already dead, so what's with the tears?

Then I read up on the information they had on Mary II and learned about her not having kids and such. And things made sense. 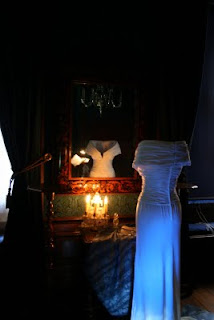 The other princesses were Charlotte, Caroline, Victoria, Margaret, Diana, and Anne. The picture at left is from the display about Margaret and Diana, which the exhibit calls "The Dancing Princesses." As you can tell, it was pretty dark (and was throughout), so hard to take pictures (no flash allowed).

And since I'm pretty weak on British history after, say, 1660, I learned a lot about people who don't necessarily catch my attention (I would have noticed Victoria, though). And that's neat. 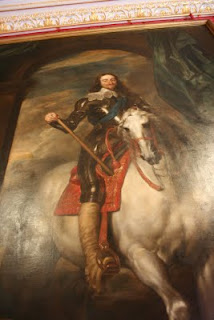 What I missed, though, was the usual history of the building and so on. Here's the everpresent Charles I (I think) in one room, barely visible, and not well-labeled. I'm sure I missed noticing lots because of the lighting. And that's especially a shame because this palace felt in some ways the most relaxed. I was standing pretty darned close to this painting to take that picture.

And then I walked home through the park, which I enjoyed a lot. I've noticed there's something strange for me about this park: I usually expect to see lots of pine and other gymnosperms. But I don't seem to see them here.

Still, it's a beautiful park, and as soon as I shake the cold, I'm going to try a short run.
Posted by Bardiac at 1:58 PM