"To the Globe I Rowed"

Not me, but I will happily send someone a very fine and exciting postcard from London if you are the first to identify the source of the quotation. And, I'll send more postcards if subsequent people can tell me cool stuff about the source. 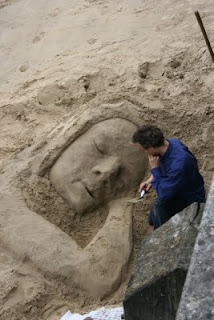 So, I didn't row, but I tool the tube to Waterloo a good bit early to take a walk on the Queen's Walk along the river. Even on a weekday, there's lots happening, especially at low tide. Here's a man making a sculpture on the tidal beach. Amazing and ephemeral. 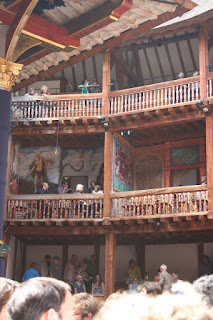 The theater is such a cool space. The boxes just at either side of the stage are specially painted. I didn't get to go up there, because I am a groundling. Best five pounds anyone's spent lately, I bet. 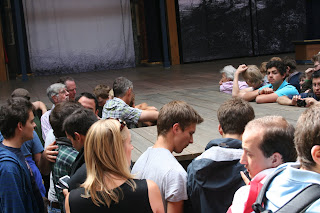 Here's what the stage looks from my camera held above my head. I'm pretty close, and the sun was shiny which felt good, but made things a little glary for the camera. 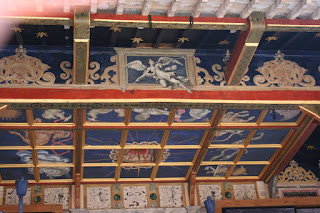 And here are the heavens. Don't they look heavenly? Actually, they sort of remind me of the color of the ceiling of the chapel royal at Hampton Court Palace, except the chapel was a slightly different blue. Still, they both have lots of starry decorative stuff. 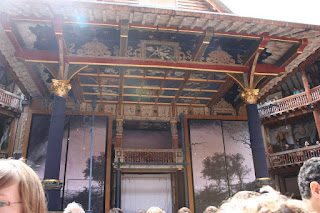 And here's a straight on of the stage, but you can't quite see the stage because I'm not quite tall enough holding the camera. Still, it gives you a sense, I hope.

I saw All's Well today. The play's not one of my favorites, but then, I don't think anyone much lists it in their top three, even. And it's certainly not as wonderful as Faustus, but then, Faustus is a pretty darned amazing play. (I've never understood why anyone would think that the person who wrote Faustus also wrote Shakespeare's works. They just don't feel at all alike to me, structurally, especially. And surely Marlowe's works are enough of an accomplishment for any writer?)

The standout player of the play for me, though, was Janie Dee as the Countess. She's got real stage presence.

The program did a nice job talking about how the play forces us to question how we like fairy tale endings, which is as good a sense of things as any. 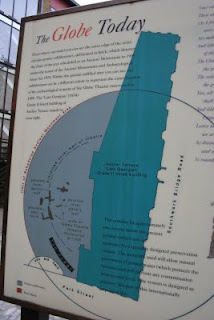 I walked towards the other tube station on the way out, and saw the actual, real Globe site. There's the place. Right there.

The placard explains the site a bit, and says that there are different colored bricks laid where the archaeological dig found building foundations. 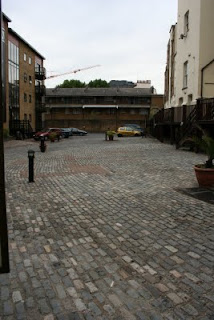 In this picture, I'm trying to show the reddish/brown bricks that denote where the building foundations were.