Another Day, Another Amazing Day

First, let me say, I'm so tired of this cold. Bleargh. I don't get colds often, but I'm whiny as all get out when I do. WHINE!

When I went to see the plays at the Globe, I didn't go early enough to go through th exhibit and do the tour and all, so today my plan was to do that and then go to the Tate (very close). It seemed very do-able.

I took the tube (working on it!) to Southwark, and just as I was beginning to feel good and confident about finding my way around, I got good and lost. As those who've biked or driven with me will know, my sense of direction is so bad that if I say I think we should turn left, you can pretty much be sure we should be turning right. 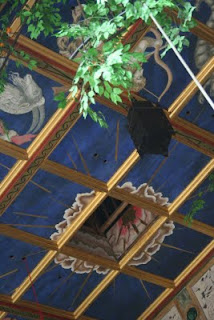 I eventually found my way, and started reading the exhibition stuff while I waited for my tour. Then I went on the tour. It was GREAT!

Here you can see the heavens with the trap door open. Coolness! 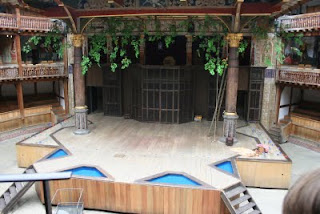 We went up into the second gallery, so I got a different view of the theater and stage. This time the stage is set up for Much Ado, which was the matinee. 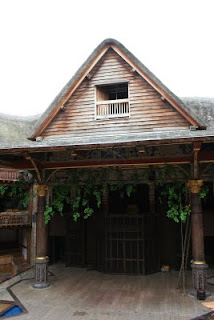 And look what's there above. I couldn't see this from where I was standing, but from the gallery, you can see the space above. The tour guide talked about making music and sound effects and such up there. 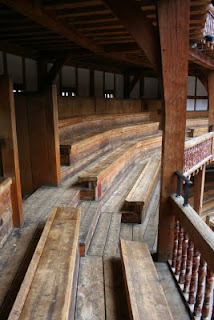 And here's a picture of the seating in the gallery.

So that was pretty good, and I was well-satisfied. I checked, but the performance was sold out, alas. Then I went to the exhibit, which is really good. It's informative and interesting, and has facsimiles of Henslowe's diary and such. It also talked about the Rose, and mentioned a tour in a way that made it sound possible. In the time I'd been in the exhibit, it had started raining pretty well.

Now, I'd read my guidebook, and it said there were occasionally tours, but they had to be done by special arrangement, and made it sound really difficult. But I decided to ask anyway. The tour guide who'd led my tour of the Globe was there, and said that she was scheduled to give the tour, but no one had asked. She seemed a little unwilling, and I would have been willing to let it go, but then she said she'd be glad to take me.

And so she did.

In case you weren't aware, in the 80s, a building that had been built on the site in the 50s was torn down, and because the law had been changed to give archaeologists a shot at any site likely to be interesting, and this one was very likely. So they did an archaeological dig and found the foundation structures for two stages and an outer and inner wall, which is pretty darned amazing. It taught theater history folks a lot about sizes and so on, things we couldn't necessarily tell from the few pictures and stuff we have.

Then, in an amazing compromise, the new building was built over the site, but with an area below that preserves the site. It's now got water on it, to keep it from drying out and degrading, so in order to see it, you have to turn on special lights. The light strings show where the old and newer stages were, and where the outer walls were. 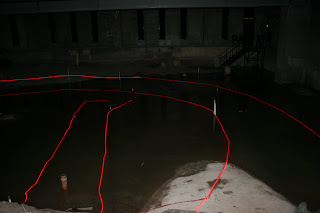 Here, you're looking at the stage on your right. The smaller stage (the line on the right) is the later stage, which allowed more groundlings in the audience. The line to the left is the older stage, which was evidently taken out and replaced by the newer one. 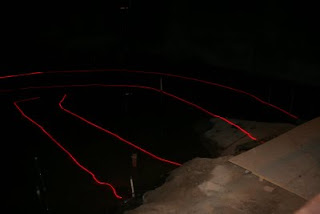 It was extraordinary to get to go there and see what's there. There's hope that someday, the Globe Trust will be able to develop the area and complete the archaeology, and make it into a better educational site. Meanwhile, I felt so lucky to be able to go in and see it and learn about it.

I never did make it to the Tate today.

In other news today, I really, really don't understand how university applications and admissions work here, not at all. Today was the day that students found out their A level grades, and so found out if they got in where they thought they might if their grades were good enough, or not, or if they basically have to scramble to try to get a spot in a program. It seems extra complicated because students enter having declared a course of study (a major, more or less), and it's not easy to change. There is much discussion on the news about difficulties, since a lot of students who might have taken a gap year chose to apply this year because next year tuition will be going up hugely. Or something like that.