With friends like Henry VIII, who needed enemies? So it went for Thomas Wolsey.

As you'd expect, I went to visit his house. Except it wasn't his house for long, though while he owned it, he did some building (or hired people to do some building), because Henry decided he'd like it, and that was apparently that. But Henry didn't like it well enough, so he, too, built more, and made it even more splendid.

And then, of course, Henry died. Time passes, and William and Mary added a whole big wing, changed the gardens, and changed it from a Tudor feeling palace to a Tudor plus palace. 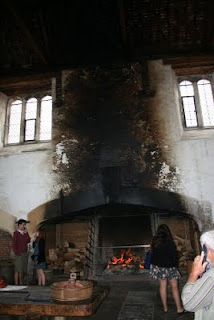 At any time, though, people need to eat. Here's a picture of a kitchen fire area. It was lit, and really put out a lot of heat!

I was interested to see the soot marking up the side, and well to the wood beam looking ceiling. It's a wonder it didn't burn! (Maybe it did, and more than once? I don't know.) 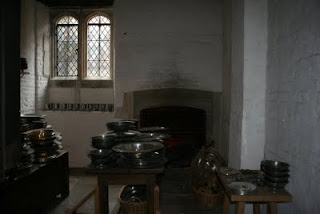 And here are plates. They served something like 600 people at a time when the king was holding court. And then the local resources would run short, and he'd go off to another palace. Life was tough... for the people who had to pack and manage things! 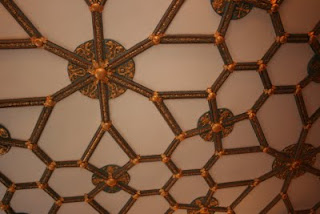 I love ceiling decorations, and this place has the most amazing ones. The best are in the Chapel Royal, but you're not allowed to take pictures in there so I don't have pictures from in them. (But I found a link! And it's official!) 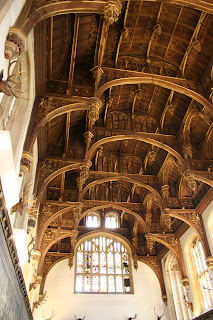 This is a picture from the big Tudor room where courtiers would hang out, hoping they could beg the monarch for whatever favor they could get. It's huge, just huge, and the ceiling is amazing. 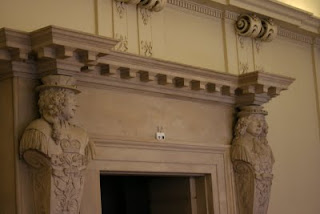 And then you get to the later part, the part that William and Mary had built. This is from Mary's apartment, the room where her guards would have hung out. Check out the supporters (?) for the fireplace. 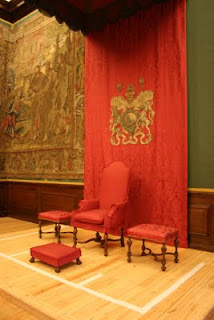 And here's where William sat. (They ruled jointly, but they had separate apartments. Totally outside my experience of married folks I know.) 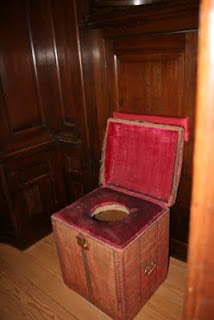 And here's a totally different sort of chair. 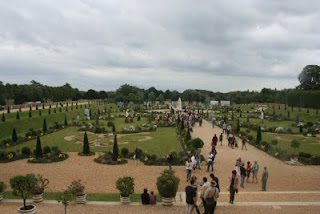 And a garden. I asked a guard, and they have a garden staff of about 40 all year around. Wow. That's a lot of weeding and planting, isn't it?

If you look carefully at the center of this picture (you might have to click to make it bigger), you can see some costumed performers. It was a special day of stuff celebrating the William and Mary era, much of it in the gardens. 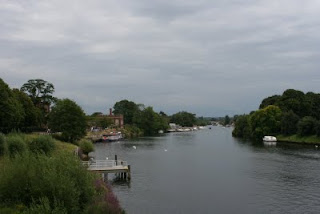 Then it was time to go home. To get there, I went to the Waterloo station and took a separate train that ended right near, and walked over a bridge, and there I was.

But here's the Thames! I'm guessing Wolsey would have taken a boat of some sort up and down, and it would have been quicker than a wagon or carriage, right? (And probably more comfortable.) I'm grateful to have subways and trains, since I don't think anyone would want to row me up and down the Thames on a whim.

A cool thing: I finally realized that if I buy a year's membership, it's cheaper (assuming I go back to the Tower) than buying separate tickets to each of the four royal palaces. So that was good!

Today, I went to have lunch with the cousin of a friend, and it was lovely, and nice, and in all ways a wonderful way to spend the day. They took me to see Kenwood House, which has a wonderfully intimate art collection. It's the perfect size, small enough to walk through and take time, and big enough to totally engage the mind. I love seeing pictures of people I've read about! There was one of Richard Sackville, the wastrel gambler first husband of Anne Clifford! And he looked every bit the fop! (In fact, here's a link to the picture I saw! Check out the shoes and stockings!)

ps. For anyone who's worried, I wasn't near the Tottenham riot last night. I only found out about it on the TV.
Posted by Bardiac at 12:04 PM