I'm off to the British Library this coming week for a two week visit.  I have reading plans, theater plans, and fun plans.

But first, I have a lot to get done.

Today, I planted some garden seeds... 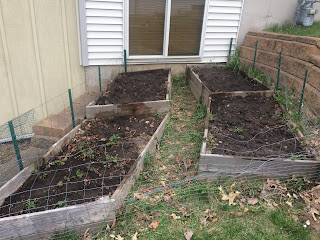 It's too early for some things, probably (given our average frost dates), but some things will probably be okay.  Yesterday, I planted some native flower seed in my deck planters, so hopefully they'll be okay.

I thnk I've made all the travel and hotel arrangements I need, and have theater tickets.

I need to do the union books before I go, and make sure all our dues are paid up.  And I need to write a check to reimburse an officer for some expenses.

And I need to get my computer checked for viruses.

I really need to practice violin (which is what I'm doing after I finish posting), clean the house a bit, and do some laundry.  And I need to find my passport (it should be pretty easy), my BL reader's card (should be easy), and figure out what to pack, and yes, pack.

I need to fill out a form for my financial advisor.

Here's a picture from April 17! 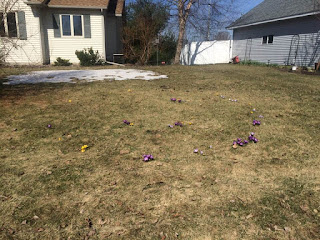 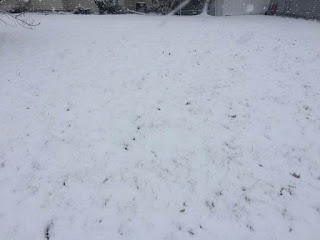 SAA is the Shakespeare Association of America, the conference I went to this past week.  I didn't take my computer, so I didn't blog.

I had a good time, mostly because I spent time with a friend from grad school who's super nice, smart, and all the things we want friends to be.  I also chatted with DG, who I met a couple of years ago.

I heard people saying good things about seminars this year, mostly, more than in most years, it seems.  I thought the papers in my seminar were sort of all over the place, but our conversation was really good because it brought together the bigger picture issues well.  And many of us had a lovely dinner afterwards.

It was expensive, and none of the grad students came; I wonder if they looked up the restaurant ahead of time and decided they couldn't afford it?  One of the plusher folks picked up most of the tab for a couple of others, which was generous.  I must admit, I looked at the menu and saw no prices, and was worried--and asked.  It was a fixed price for an amazing dinner sort of thing, and delicious, but I don't think I've ever spent as much on a meal before.  (And the plusher person was exclaiming about how cheap it was, but then, they live in a very expensive area.)

Before my seminar, I was sitting outside in a nice sitting area (the hotel had REALLY comfy, relatively quiet sitting areas around the meeting room floor, which was great), and a young, white man was talking to another person, who asked if he'd had a good time in his seminar.  He expressed disappointment that his paper hadn't been talked about, and the two people who'd responded to him were grad students who didn't know much about the issues he was addressing.  He went on to say that famous person 1 and 2 should have been his respondents because they would have known what he was talking about.  He went on to say that his dissertation director really isn't an expert in his area, so he really did need that sort of response.

So, on one hand, I'm sort of sympathetic: one always hopes to get helpful responses.  On the other hand, I was sort of irritated, too.  We all want good responses to our papers, always, and yes, we all tend to be focused on our stuff more than other peoples' stuff.  But I would have had more sympathy if he'd expressed the slightest awareness that maybe his paper really wasn't as incredibly important and wonderful as he thought?

I mean, he says he's not working with an expert in the area, so maybe his director isn't pushing him, or hasn't told him that he's behind the times, and the conversation he thinks is super vital was done three years ago or more, done and dusted.

The sad part of the SAA, or maybe not, is that I was going to good panels and seminars, and barely got outside.  And because of when my own seminar was, I didn't play tourist at all.  But I learned stuff!

It seems like a new generation has taken over, and that's quite promising.  And in the process, schools that used to be early modern power-houses, with lots of panel presentations and such coming from them, have faded and other schools are coming forward, usually public R1s now.  But still, the focus is totally on R1s, of course.

Some previous SAA responses: 2014  in which I talked about some folks who teach doctoral students and the job market.

I'm signed up to help with bird banding tomorrow!
Posted by Bardiac at 10:57 AM No comments:

Adjunct Stuffs in the Chronicle

In The Chronicle of Higher Education on-line, I saw an article (in the advice area), "A Letter to Full-Time Faculty Members," by Jordan Schneider.  In the article, Schneider proposes:

So if adjuncts are so attractive because we’re so cheap, powerless, excluded, and replaceable, the solution seems to be to make adjuncts more expensive, more empowered, more included, and more secure in our positions. One idea: Create a new faculty tier of "super adjuncts" who would teach three classes a semester, and be paid around $20,000 to $25,000 for the term—more than what adjuncts now make, but still less than a full-timer. Give "super adjuncts" a vote in departmental and faculty matters, require them to be involved in some modest sway in the academic life of the department (through mentoring, scholarship, research, or faculty development), and make sure they have some measure of real, contractual job security.

The thing is, full-time faculty at NWU, a regional comprehensive public university teach mostly 12 credit hours/semester, so more than Schneider is imagining for "super adjuncts."  Our full time adjuncts (most of the adjuncts in my department have full time employment and benefits) teach 15 credit hours/semester, but aren't asked to do service or research (though, of course, those who are trying to get TT jobs are also trying to keep research alive).  (We have a pretty good track record in the past 15 years of encouraging adjuncts not to do service, and telling them up front that we can't legally consider service in evaluating their work.)

The salary Schneider mentions is about what our assistant professors make in poorer paid fields (literature, as opposed to, say, English Ed, much less business).

I think Schneider thinks tenured faculty have WAY more power in hiring decisions than I've ever seen.  And from the comments, I think even most mid-level administrators have relatively little power.

We're bleeding faculty here right now.  We've had retirements in my department, and two younger faculty (one tenured, one tenure-track) have left, neither for academic jobs, both for good personal reasons having to do with preferring to live with a partner or family.

And ours isn't the only department, from the rumors I hear.

We also have a couple colleagues expecting babies this month, which means other folks will be covering their classes.