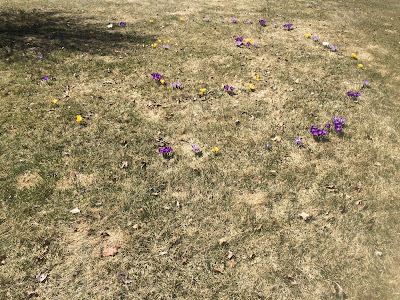 It's time for the annual Crocus Smile art installation picture!  If you recall, just last week, it looked like this.  (Scroll down for picture.)  Now the snow has melted, and you can see the smile.

It's quite a bit later than last year, but also fuller.  (The spring before, I added some bulbs, and they appear to have survived to come up this spring.)

And it's way bigger than it was for the first couple of years.

In other exciting news, yesterday, I saw my first ever Purple Finches!  The top picture shows three males (one you can only see a bit of behind the feeder).  Birders always talk about male Purple Finches looking like they've been dipped in raspberry.  They're much redder than House Finches on the back and wings.  And they don't have dark stripes on their flanks as House finches do.  They also have notched tails, which House Finches don't.  (It's not the best picture as a picture, but it shows the important identification features I was looking at.) 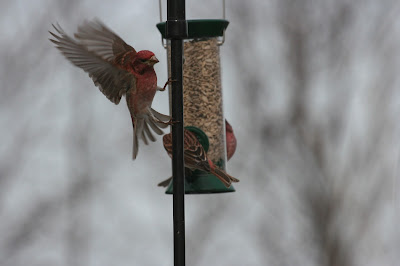 The next picture is a female, which is the same size, also has a notched tail, and has a serious light colored stripe above and below the eye.  It's way more streaky on the body, but the eye stripes are the field marker people point to. 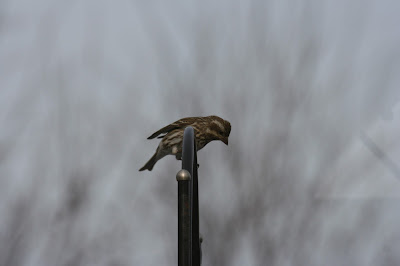 In other birding news, I went to some friends' house for breakfast this morning; they live on a wooded lot next to a lake, and it's their first spring there.  It was glorious weather, and we saw all sorts of great birds.

I saw my first Red-Breasted Nuthatch not in-hand (I'd previously seen one that had been mist netted for banding at bird school last year).

We also saw Yellow-Bellied Sapsuckers, including one that was sucking sap, so to speak.  It was monitoring three holes drilled closely together, and sucking sap from each in turn, all without moving more than it's head.

We may have seen a female Redstart or maybe it was a Yellow-Rumped Warbler (it was very grey, and seemed more grey with no real yellow markings, but...)

I still have some Redpolls feeding on my deck, and a few Juncos, but the American Goldfinches are bright yellow now.  There are also Mourning Doves.
Posted by Bardiac at 1:44 PM