Old bike saddles used to be made of leather riveted on to a frame. Here's a picture: 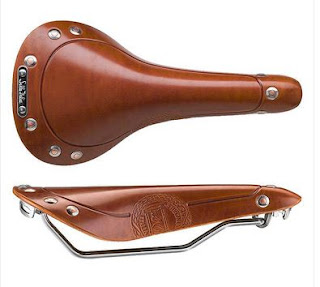 When a biker is really working, really at the utmost of their abilities, they tend to sit really forward, right on that front rivet.  So in the biking world, being "on the rivet" means you're working really hard, and you can't do much more than you're doing.  And the rivet isn't especially comfortable.

Here's a picture of Jens Voigt on the rivet: 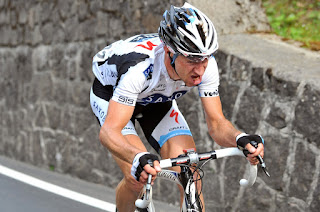 That's how I feel these days, though he looks much better at it than I ever will.

You might remember the mandated training sessions that I told you I was supposed to sign up for.  As I mentioned then, I dutifully signed up.  And the first session was surprisingly helpful and good.  I have another session coming up for three hours each over the next three Wednesday afternoons, and it's the seven habits one.

On Wednesday afternoon, I got a message with "high importance" (the stupid red exclamation mark) telling me to go do something in preparation for the course.  And I thought, it's next week, I'll take a look over the weekend.

Like an obedient so and so, I opened it up, and there were instructions: sign in here, fill out this form.  So I did.  And then the next instruction: send this email out to at least ten people (and as many as 30) who are either your supervisors or who you supervise, and ask them to spend 15 minutes filling out the form.  And I'm already late.  And the person has asked that I email TODAY to confirm that I'd sent out the survey things.

I admit, I sort of lost it.  Right there in my office.  It's been that week.  The latest stuff: the headmaster decided, under pressure from students, to cancel two days of classes over the next two weeks to give students a break (which they need because he decided we wouldn't have a spring break this semester to prevent students from traveling).  Note that faculty folks had asked and begged for him to put in a few scattered days if he didn't want students to have a whole week, and let us plan for those.  But no, he'd said.  (It's worth noting that "travel over spring break" for most of our students involves going home, which they've been doing on weekends anyway a lot, picking up extra shifts at their job, and yes, getting some extra rest and catching up.  Few of our students have the finances to go party in Florida.)

Most students are really happy about the two days.  Faculty are less sanguine.  For one, it means most of us have to rethink at least one hour each for three or four courses (our typical load) and work around.  And many of us had built in some flexibility and already given students a day or two off our courses.  (Because that's what the headmaster had said we should do.)

Grading isn't going to stop, nor are committee responsibilities, etc.  It's yet another half-assed adding to instructor workloads.  It's like the headmaster has never actually taught a college course.  (Because, it's true, I think.  This is why people with degrees in "higher ed management" shouldn't generally be in positions of power in universities and colleges.)

And about two days before that, we got the announcement that because they've opened up a vaccination clinic on campus, they're using one of the faculty parking lots for vaccination parking, so we have to park at a further lot.  Yes, it's a great thing they're doing vaccination clinics.  Yes!  And it's a small enough thing.  But it means a longer walk for most of us.  It adds up.

And no, thank dog it won't interfere with the special marked places where the administrators have reserved places: 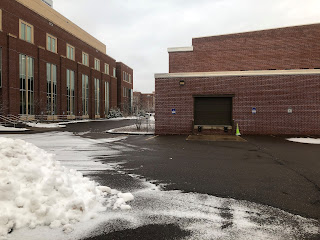 Except that the reserved and numbered spaces (the one to the left of the loading dock is where the highest academic official parks) are pretty much empty every time I walk through the lot on the way to and from my office.  (I guess they're all working from home even though they've insisted that all of us teach face to face unless we have a specific medical issue.  That's leadership, right?)

Yep, today I'm a bit on the rivet.  It feels like most of us are these days.

I emailed the two people who mostly supervise me, and asked them to fill out the thing, noting that I'd dutifully signed up for the training.  But I didn't ask any of my department colleagues.  If I'd asked ten of them, and it took 15 minutes each, that would be two and a half hours of peoples' time.  There's no way.

And then I wrote an email to the "training person" on campus (the one who'd sent me two urgent emails and who I was supposed to email TODAY) saying that I had sent the survey to my supervisors, who were part of the management structure that mandated this training, but that I wasn't adding to the work of anyone else so wasn't sending it out further.  And then I suggested that the description of the program had given specific dates, and I'd planned out to spend that time working on the program, and if they were going to require people to do stuff ahead, they should put that in the description of the program so we'd know.

And THAT is how you confirm the label of trouble-maker, no doubt.