I've been getting worried messages on fb and such, wondering if I'm in the riot area. And I'm happy to say, so far, I'm not. That doesn't mean things can't change, but so far, I'm not near.

I went out of town for the day today (more in a bit), and when I came back, having been newsless all day, I was curious about my neighborhood. But there's the usual mixed age, mixed race crowd of people relaxing at the outdoor pub seating (and I presume others are inside), walking here and there, often dragging suitcases, talking on cell phones (I should say "mobiles"), and just being in the area.

My super-duper-please-don't-fail-me-now system of staying out of trouble is to not worry if lots of regular folks are about, and to try not to be where regular folks aren't, if I can help it. And that goes double in places where I'm unfamiliar with things (and I am here, for sure). And if there's trouble, and I don't want to be in it, go the other way. (There might be a time when I really should choose to be in some trouble. I hope I will know that time, and have the courage to step up.)

My day to day was just about as perfect as one could wish. I took the train to Oxford, where Brian and his Better Half guided me around, pointing out the coolness, patiently waiting while I took my usual pictures, showed me around his college (how cool is it to have a "college" at Oxford!), and then took me out to a really good lunch, which set me up for spending more time wandering around and going to see the Ashmolean. 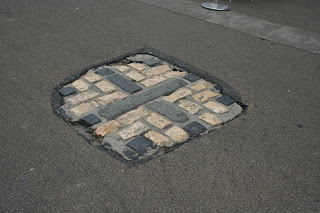 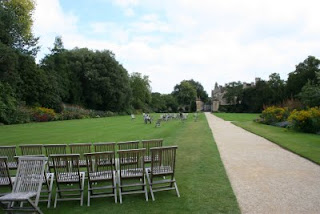 Here's a green at Trinity. Isn't that amazing. I got sort of amazed by Trinity for a while, and didn't remember to take pictures. It's so exactly what you might expect an Oxford college to be. 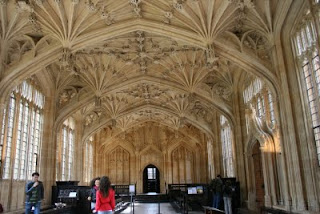 This is part of what was the Divinity Lecture place (if I'm remembering correctly. There's a chair here that was built from Sir Frances Drake's famous ship, The Hind, that went around the world! 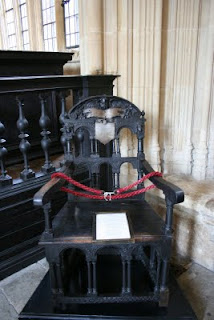 Look, a chair! I'm interested in Drake a bit because when I was a kid, Drake was the one English name that made it into my history class other than the 13 colonies and Revolutionary War. So this is way cooler for me than it may be for you. 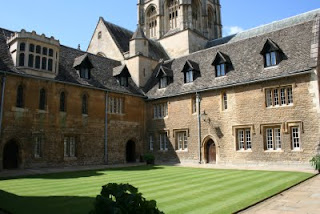 This is Mob Quad inside Merton College, which, I'm told, is one of the very first of the quads Oxford is famous for. 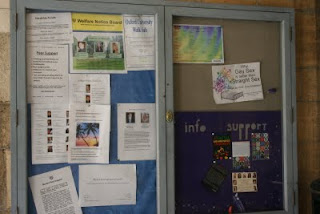 Here's a message board up at Merton, just to show that there's something in common with the colleges and universities I'm more familiar with: it's an activities and who to call for peer counseling sort of board.

So, those are my Oxford pictures. Way cool, and totally unlike any college/university I've ever been to before.

And once again, thanks to Brian and his Better Half for the tour!

The show! You're wondering how A Woman Killed with Kindness was last night, aren't you?

Mixed. The staging was really interesting. It was played in maybe the early 20th century, with two partial house interiors side by side. On the left, the home of Sir Charles Mountford and his sister, Susan. That side looks sort of Georgian, with that sort of wall feel, rounded stair, and so on. On the right is the interior of John Fankford and his new wife, Anne. This house looks much more early 20th century. I think they're trying to say something about old/not as old money.

I haven't read the play in lo these many years, so I don't remember if there are big dumbshow sequences, but there were in this production. It was sort of effective, but also distracting at times. I had difficulty following what was happening on both sides of the stage at the same time, sometimes.

I was up in the balcony, and also found it weird to look from that angle, and had some difficulty hearing one or two of the actors well.

I guess for me, the biggest failure was that the play didn't hit me.

Let me admit that I'm the biggest whuss in the world when it comes to crying when people die in literature. I get teary eyed just thinking about Cyrano. But I didn't get teary eyed at this play, and I guess it just didn't hit me strongly enough.

I'm a theater noob, and that was brought home to me last night. I can probably count the number of professional plays I've seen without taking off my shoes. I didn't grow up seeing plays with my family (though we did go see musicals a lot, but not plays per se). I remember the first play I saw, with a junior high school program that took us to a matinee of Cyrano. The next time, they took us to Caesar and Cleopatra. Both made a big impression on me, but I wasn't the kind of kid who had a lot of motivation to go out and do stuff like that on my own. (When I was supposed to read Julius Caesar in high school, I got totally, totally confused.)

Back to my noobness. I got to the theater early, and got lost in the theater complex. It's huge. And then I was worried because there was an overhead announcement about the play about to begin, but I couldn't figure out to get where my seats were, and then when I asked, the woman said we couldn't go in yet. And finally I realized that there must be another play in the complex that started earlier. I'm always one of the people at the theater who looks totally lost and out of place, you know? I have friends who always look totally cool and knowledgable, and I'm just not them. (Happily, they put up with me.)

And then we finally got in, and that was cool.
Posted by Bardiac at 2:03 PM