I went to the Tower again today. I was only going to spend half a day, but then I spent the whole day, because there's so much to see. 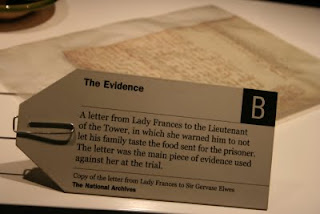 There's this. It's part of the Overbury display, which isn't nearly as in depth it should be (see, I did that on purpose!) How many other people have spent more than 15 minutes trying to figure out one Frances Howard from another? How about taken the time to figure out that Carr wasn't the Somerset who built/owned Somerset House? Only me?

I didn't take a picture of where Overbury is buried because it's in the Chapel Royal, and the guide said not to take pictures. (And do YOU want to get in trouble with the people who guard the Tower? I don't.) 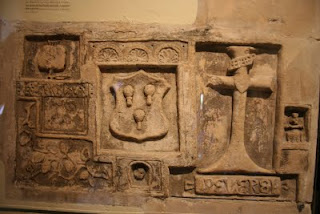 I also took several pictures of some of the carved graffiti. I imagine some people had a lot of time on their hands, eh? But, they also must have had some fairly sharp objects in order to cut into the stone. 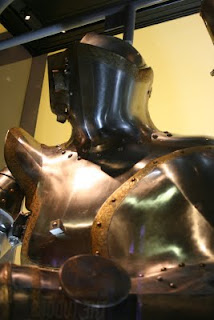 I took pictures of armor. When I look at this, I have to ask, how did the wearer see out? (I think actually it's tilt armor, so he'd be on a trained horse in the list, and pretty much run along with the lance more or less aimed.)

I also walked up the stairs to the top of the Monument, 300+ steps in a tight spiral. I have a feeling that restoration folks were quite fit!
Posted by Bardiac at 2:54 PM