Well, clean enough. I did spend the day in Bath, and I did try drinking some water, but I did not take a bath in Bath. The water tasted not great. I've tasted worse, but not happily.

I started out by going to the Jane Austen Centre. I want you to know that I hate Jane Austen, just to make that clear. I hate her for two reasons.

1. When I try to teach Austen, I sort of drool stupidly and just repeat, over and over, "isn't that amazing?" and "she's so good" and "isn't that funny?" As you might imagine, that doesn't go over terribly well with students.

2. She didn't write nearly enough. If she'd written just a couple more novels... wouldn't that be wonderful? (Yes, I've read the juvenalia, but seriously, if she'd written as many novels as Shakespeare did plays, what an orgasm of novel reading!) 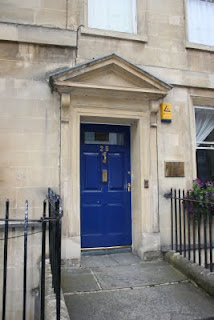 The center was cheesy (they call her "Jane." Can you imagine a Marlowe center calling him "Chris"?) but also informative. I learned a lot about Austen's biography (I guess I never bothered with that part of the introduction of her novels). The center is just down the street from where she lived for a couple of months, so naturally, I walked up and took a picture of the door. I wasn't alone in that, either. There's some poor doctor whose door stars in a LOT of tourist pictures. 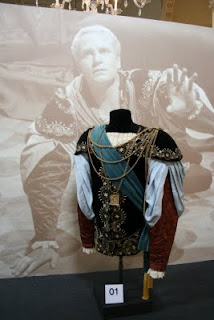 Then I walked to the Assembly Rooms, which feature in Northanger Abbey. (Have I mentioned how hilarious that novel is? Look, it's just...) Oddly enough, the ballroom is hosting an exhibit of award winning movie costumes. It made it sort of hard to get a real sense of the ballroom, but I got to see some fun costumes. 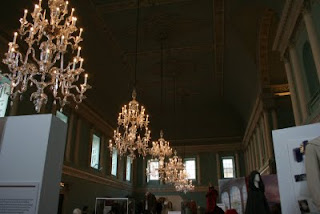 Here's a shot sort of around the costumes. The walls are a lovely light blue, and it's a beautiful space. But it wasn't as big as I would have expected from reading about the Assembly Rooms and all. 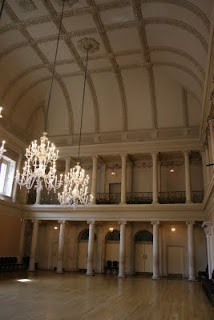 Here's the tea room, where all the people who've gone to the ball go to get snacks as 9pm. Supposedly, they served the snacks at that end, under the colonade area. 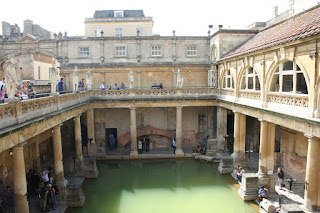 Look! It's the Roman Baths at Bath! Or, as they would have called the town, Aquae Sulis. (This blog is nothing if not educational!) This is the area called the Great Bath, and back when the Romans were in charge, they had a huge roof over the area, so (according to the guide thingy) the water wouldn't have been as green. 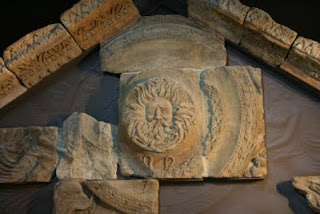 The baths weren't just a bath to get clean, but part of a whole temple complex. This gorgony looking figure was on part of the temple (I think), but aren't gorgons female? So maybe this is a Macbeth witch gorgon? I think I may be on to something here! 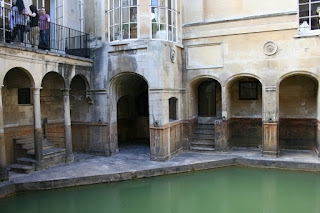 And this is the spring fed bath, which the Romans didn't bathe directly in, but the 17th and 18th c folks did. Supposedly, the water line
about midway up the columns was the 18th century level. 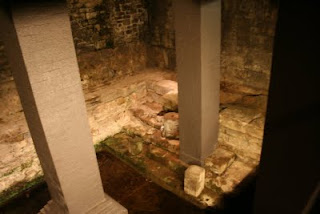 Here's a bath that's under the current road. The big modern columns hold up the road. Supposedly, they haven't done archaeology on the whole site, so there may be lots left to learn!

This was an absolutely fascinating place to visit, just amazing. But it felt like I'd visited three very different Baths!

And then when I got "home," I got off the train in Paddington Station to see this: 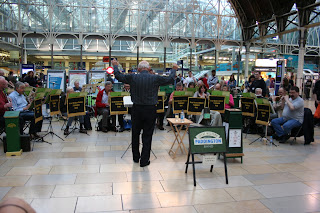 This is the Great Western Railway Paddington Band, which plays at Paddington Station every Friday from 7:30 to 9pm. How cool is that?

They handed out a flyer thing to explain about themselves, and in case you're interested, it says that "The Band is always looking for New Players. Even French Horn." And gives a number.

It also says that "There are no Rehersals as all Performances are Public Concerts." How's that for playing without a net?

Still, it was pretty cool to get off the plane and hear a band, and then walk forward and see one! (I thought for a bit that it was a flash mob thingy, but it's more a Victorian social leftover.