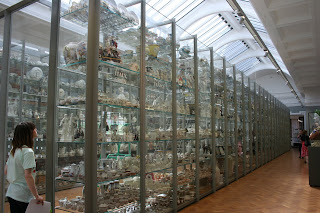 A quick view of ONE of the several ceramics rooms at the Victoria and Albert. There are a LOT of ceramics in here!

I don't pretend to understand US politics. But I'm totally out of my league trying to follow the political reactions to the London riots. There are so many points of view, and I am only rarely seeing people of color talking from their point of view on TV. (I have seen a couple, just not many.) But I have this sense that recent events look very different from different points of view.

I had a lovely conversation yesterday with a museum caretaker at the Victoria and Albert, mostly about other things to see and such, but also touching on the riots.* I tend to shake my head and comment about how hard it is for someone who's not a Londoner to really understand what's up. And then if someone wants to tell me about their experience, they know I'm trying to understand. The caretaker mostly talked about where he lived, and seeing smoke rising not far from his home.

I've mostly stayed home today (after going out and getting some pseudoephedrine) because I've got such a nastily stuffed nose and a cough, but I may go out for a walk in Hyde Park in a little bit. (I feel like I need a little exercise, but not too much, and not indoors.) But I've watched the parliamentary discussion, and it's pretty interesting and confusing. There seems to be a lot of standard things one says, or asks (such as, "Does the Prime Minister not agree that...?"). And as the discussion has gone on, the room has gradually emptied quite a bit, so that it looks like once people get heard on TV, they feel free to leave or something.


*If things are quiet, sometimes, I say to the caretaker, "Does it ever get old?" with a vague wave around, and sometimes they just smile and shake their heads, but often enough, they talk about what they like best in the museum, and that's helpful to me, especially in a really big museum.

Several people have mentioned the Sir John Soane museum as being really worth seeing, so I'll probably head there. I also want to go to Stratford and Dover, but I really, really don't feel like sitting on a train right now.

(Not to worry: my glands aren't the least swollen, and I only feel totally stuffed up and coughy, but not achy or with an upset stomach. But a stuffed nose is a pain in the nose!)