One thing: when you visit Versailles, it's easy to see why some folks thought they needed a revolution. 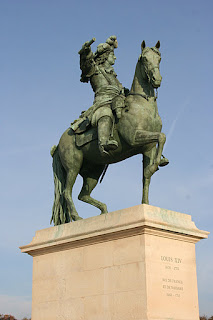 That said, wow, I had a great time.

I had been hanging out with Singing Woman, who speaks a bit of French, but she didn't want to go to Versailles, and I did, so I went on my own.

I'll admit it: I was a little nervous before I went to Paris because I don't speak the language and feel unsophisticated and stuff. But it was fine, and better than fine. I got directions at the hotel for the special train (RER) and bought a ticket at the Metro station. I had to switch trains, but it was straightforward and obvious that they were really used to directing tourists to Versailles.

Imagine, when Versailles was built as a palace, it was well outside of Paris. Now it's a suburb. And, according the the stuff I read while I was there, Louis XIV built it so that he could get all the bureaucrats out of Paris and under his thumb to run things, which works well if you're really good at running things and they aren't too big, and then probably doesn't. 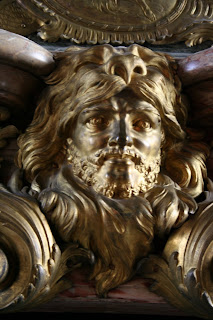 This is Hercules, on one of the fireplace mantles, I think. I love the detail of the lion helmet/hat thingy with the eyes closed and the nostrils just off center, and the lion's face becoming one with Hercule's hair. This mantle is sort of a toss off, not one of the big pieces of art, and yet it's still stunning and beautiful. It could be all by itself and I'd stop and gawk.

But then the whole place is just overwhelming beyond belief, and poor Hercules becomes one of a million other things you see and finally can't really take in any more. 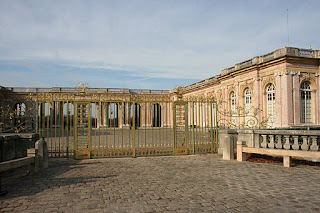 Because we'd gotten the Paris pass thing, I didn't have to wait in a long line (yay), and also had already paid for an entry into the Trianon palaces, the smaller palaces in the estate. So after I walked through and got all overwhelmed by the main palace (including the Dauphin's rooms and the family rooms), I got a ticket for the mini-tram thing and rode down to the Grand Trianon. It's a pinkish marble, and just about as beautiful as a building can be in the sunshine.

I really liked it. Somehow, it seemed like an intimate palace, if one can imagine such a thing? I mean, I could imagine real people living there, and I really couldn't imagine anyone real in the main palace at all because it is just too huge for comprehension. 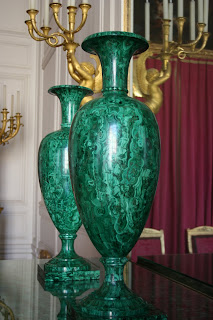 There was a room with malachite vases (look!) and a table and such, and it was just eye-stopping. I could have stared at those vases for a good long time. I love the patterning in them. I guess they're somehow carved out of solid stone? And then polished beyond belief?

Sometimes, I've seen pottery with crystaline glazes that look sort of like that, except not in such a perfect green. (I really like a good, deep green.)

So, in case France is wondering, the malachite vases are welcome to come visit the BardiacShack any time you get bored of having them at the Grand Trianon! 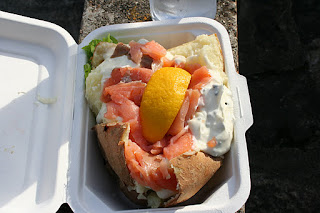 After my visit to the Grand Trianon, I was hungry, and lo, there was a food stand! Actually, it was a baked potato stand. I'd never seen a baked potato stand before, but it's baked potatoes! What (except for Dan Quayle's spelling) could go wrong? Not this! This, my friends, is a potato done in Norwegian style (or something in French), and it's hot potato with sour cream, herbs, and smoked salmon with a lemon slice. I doubt Louis the XIV had a more welcome baked potato! It gave me the energy to go on to the next palace, the smaller Trianon. 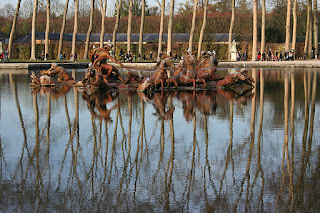 I took the tram from one Trianon to the other, and then to the canal thing, and walked through the gardens up from there. (I'm really not happy with the composition of this picture, alas. I took one with a better composition, but somehow the horses are going uphill in the water, so it just doesn't work. I don't know how I got it so off kilter. Still it's Poseidon and horses, and they're coming up out of the water! 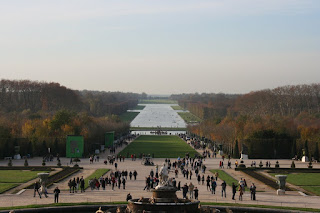 The gardens were off season, and yet still beautiful and green and so very full of people wandering about. I imagine in spring and summer it's more beautiful with flowers, but there are also even more people going through. (The gardens were fine, but going through the main palace was pretty crowded. I think part of why I found the Trianon palaces so much more appealing is that they were far less crowded. I can't help sometimes feeling that way in crowds.)

And that was my visit to Versailles. I had figured I'd probably take half a day and then go visit the Orsay in Paris, but it was a beautiful day and I was really enjoying the whole thing, so I didn't rush it at all. And I'm glad I didn't. I got home safely in the evening, and went to bed, and then got up early and was at the Orsay within a few minutes of its opening, so I at least got to see it for a bit.

I love Van Gogh. I would marry this painting if it were allowed. (Maybe France would let me marry the painting, but I'm sure they wouldn't approve of it coming home with me. Alas. Maybe we can just live together?) The thing about Van Gogh is that I can just look at the brush strokes all day. I look straight on for a bit, and then I move over to the side and look at an angle so that I can see the depth. And then I look from the front again. And so on. The Orsay was a pretty darned good time for me!

In addition to the Van Gogh's and other art (Lautrec! Renoir! Monet! Pisarro!) the building itself is beyond magnificent. What a great way to use an old train station!

A word about Renoir. Sometimes, his pictures of people look vapid to me. But sometimes he catches something about them with what feels to me like great affection (like this one) and then he's as good as the best. (I really like portraits, and like Raphael especially. Look at his Castiglione!)

I had a couple of hours at the Orsay, and then went back to travel back to the UK with the student group, back under the Chunnel. What a nice way to start a travel day!

I know you're all wondering what Onofre was up to while I was visiting Versailles. Well, he was up to his usual tricks, trying to get on the head of a statue (but alas, I couldn't reach)! 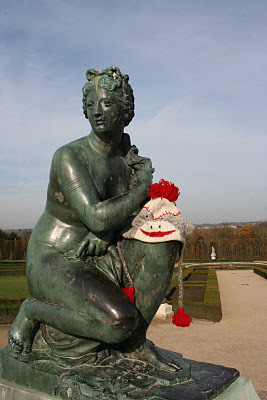