Norwich, Topping Off the Day

After I had some refreshment (a really good fresh fruit scone with blackberry jam and coffee), I was on to my visiting the parish churches on the east side. 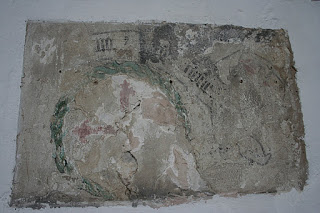 St George Colegate was beautiful, though Georgian on the inside (which, after all, is sort of fitting, no?). But there's just a bit of wall painting sort of surviving. It makes me think how colorful and wonderful medieval churches must have been inside, and makes me wish I could see one restored to look like that somehow. Or maybe a new church built to look like that so we didn't mess with a real medieval church? I think I'd get a really different sense of light and meaning in a really colorful church. 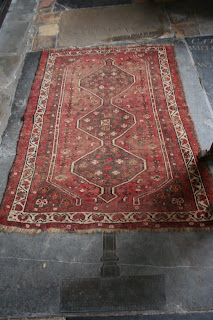 There are signs around the church explaining what's to be seen and such (as in the churches I visited the day before), but I couldn't find any of the monuments they seemed so proud of. And then I saw this. What's that? It's a rug. But there's something sticking out from underneath it. Hmmm. 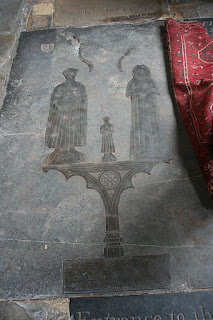 Success! At least it's success if you consider finding a 15th century grave marker a success, and I do. That gave me the impetus to go around looking, and I found another rug. 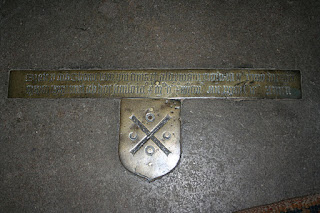 And look, it's another old brass marker. (Stick with me, I know how to have real fun!) 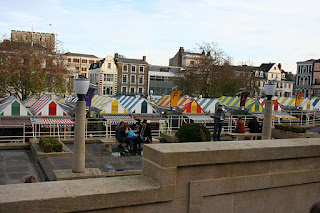 I walked around several more medieval churches that were (sadly for me) closed, and through the market. The market in Norwich is just fun. I think in order to really do it justice in a photo, you'd have to get a ladder or something so you got up high to take the picture. I didn't have a ladder. I did have some hot tea (because it's really all about the refreshments). And then I went back to St Peter Mancroft.

If you're like me, you're thinking, who's St Peter Mancroft? It's just the regular St. Peter. The Mancroft part is a place name (a lot of the churches have place names in Norwich). I asked and was told by the docent guy that in old French it was originally "magna croft" or big meadow, but people got lazy, and then it became mancroft. 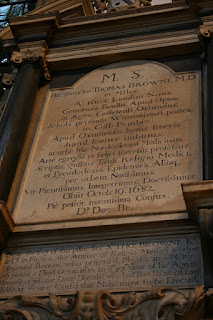 I ask a lot of questions. Sometimes, you get rewarded by learning or seeing something really unexected. And that happened at St Peter Mancroft, because in addition to asking about the name, I asked the docent if he could tell me where Thomas Browne is buried. I know what you're thinking: Thomas Browne? Really? Did you actually read Hydrotaphia, really? (a tiny bit, and I have no clue.) But nonetheless, he has the courtesy to have been dead a good long time, so I asked.

But sometimes, you hit the goldmine. Maybe the docent is bored, or maybe he's fascinated by really dead guys. And this is the goldmine of Thomas Browne weirdness. This, my friends, is a plaster cast of his skull. 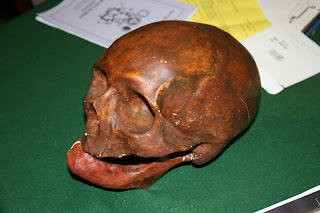 I know, it's not in great condition, but there it is. And it comes with a story. In the 1840s, "they" went to bury someone else in the floor right near Browne, and when they were opening things up, his coffin came open. And the curate at the time decided to take out the skull because it was the height of phrenology and he wanted to see why Browne had been "such a clever fellow" (as the docent put it). So he took the skull and did the phrenology stuff with it, but by the time he was done, "they" had closed up the floor again. So there he was with Browne's skull. 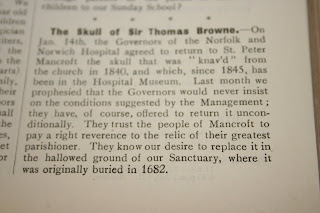 By 1845, it found its way to the Norfolk and Norwich Hospital, where it was displayed in the museum for a good long time. And then in about 1920, the church vicar asked that it be returned. And it was. But before they reburied it with the rest of Browne, they made a cast. And they wrote up an article in the parish newspaper.

When I asked about Browne's grave, the docent showed me the grave and told me the story, and then took me back to the room behind the altar where the priests do their prep stuff and all, and there was the box with the plaster skull and he showed me that, and then he pulled out the magazine and showed me that. 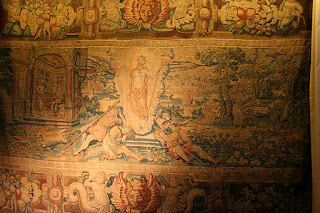 And then because I'd gotten lucky, he also showed me the 15th century tapestry that they normally keep covered. They think it was made by the flemish clothworkers (the ones who hung out in Strangers Hall and that area). The subject of the tapestry is the resurrection. On the left, Jesus is visiting Mary in a rather fancy house. (Things started looking up after the whole manger thing, I guess.) 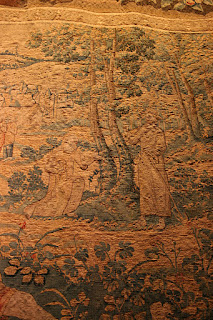 A fair bit of time ago, I heard VA Kolve give a paper or something on the imagery of Jesus as a gardener talking to Mary Madgalen. And look, here's a beautiful image of just that from the tapestry! 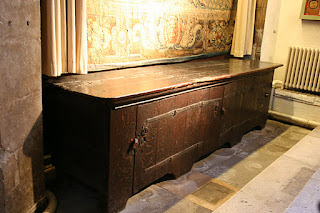 And below the tapestry sits this huge, massive chest. The docent said it had been brought to this new church from the original Norman church, and was probably the oldest thing in the whole church. How is that for way lucky for me?

I was pretty much full up on excitement, so I walked back down to the train station and caught my replacement bus (because the rail lines were being serviced) out of town. 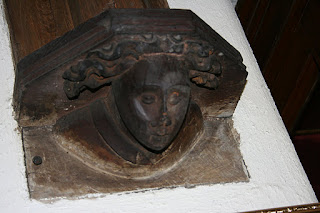 But I'm going to leave you with one last image. In the little room in back of the altar, a room where pretty much no one but the priests were going to see what's there, some medieval workman carved these lovely heads on the ends of the beams. Unlike the heads way up high in most churches, these are in a fairly small room, and I could actually see them up close. So here one is.

I think you can see why I had an even better time on this visit to Norwich!
Posted by Bardiac at 3:05 PM