Norwich - Even Better the Second Time

As you may remember, I really enjoyed Norwich when I visited in early November. I enjoyed it so much that I went back this weekend. You may be surprised to learn that I had an even better time this time.

One part of that has to do with something I've learned about myself: it takes me a good day to warm up to a city, even a small city. But revisiting Norwich meant that I was warmed up as soon as I stepped off the train. I'm glad my first visit was fairly recent because I remembered how to get places pretty well.

Another part has to do with the helpful folks at the tourist office and some just dumb luck. I got a tourist map at the tourist office (I know, I know), and asked about some of the medieval churches. So the woman behind the desk marked out some churches for me that she thought might be open, and I went on my way. 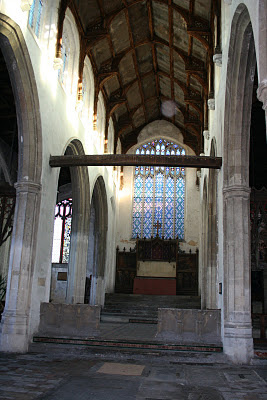 The first one, St Laurence (or St. Lawrence), was open but empty. So of course I walked in. It was totally empty, but the space was peaceable and quiet. At first it's sort of weird being all alone in an empty church, with a bicycle and carrier thing right near the door, just inside. But I walked around a bit and it was good. The ceiling is way up, and the church is amazingly light. But of course, when it was built, it would have had lots of interior paint and such, and wouldn't look all whitewashed.

I walked two blocks (and short blocks at that) to St Margarets. Unlike St. Laurence, St. Margaret is anything but empty. In fact, it was being used for an art exhibition on Saturday, so there was an artist there putting up her work. She was nice enough to let me wander around once I promised not to sue her if I fell and broke my ankle. I like that the building is being used for art and such. It seemed a whole lot less lonely than St. Laurence. (Though not as open for pictures.)

Then I went on to St. Swithun, which is now an arts center. The art center folks were kind enough to let me wander around inside, but there wasn't much to see since the space has been reworked as a concert space with a stage and standing room. 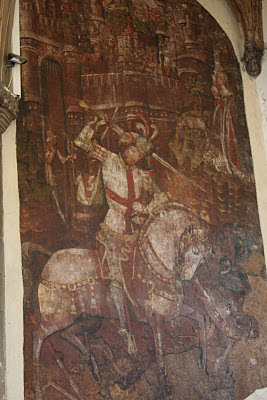 Then it was on to St. Gregory Pottergate, which was probably the very best church of all because it had this magnificent and cool wall painting still up! You need to click on that painting to see it as big as you can because it's so wonderful. As I learned on my last trip to Norwich (at Dragon Hall), there was a religious fraternity thing in medieval Norwich dedicated to St. George (yes, RedCrosse!), so here he is. (There's also a dragon named Snap in the castle museum.) 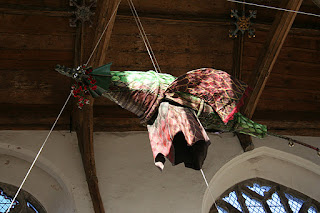 This is a modern Snap (I'm pretty sure it's not 15th century at least) hanging around. What I learned last time is that the Lord Mayor does an annual entry or something and is led by Snap, and all sorts of other festiveness. I have to wonder what would happen if poor Snap met a real dancing dragon like for Chinese New Year. I have a feeling Snap would feel a bit inadequate. 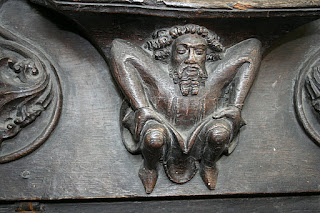 There's also this great misericord with a guy... well, the description on the website says he's sitting on his haunches, which would sort of fit with the whole semi-sitting on the misericord. But I have a hunch he may not be sitting. Look at his face; doesn't he look like he's concentrating pretty darned hard? I thought so. 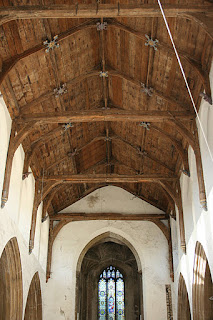 Then, of course, there's the ceiling. Who doesn't love a good medieval ceiling! I do, anyway. I can't quite wrap my mind around the idea that people built this 500 or so years ago, and it's still there, and still looks pretty darned sturdy. 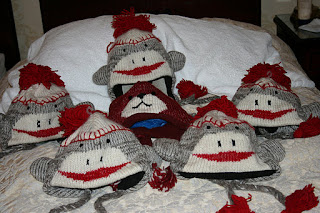 I'd pretty much had a day of medieval churches (with some hot cocoa from Caylee's to keep me going), so I wandered through the market and around as it began to get dark. You probably remember my friend Onofre. Well, when I posted pictures on eff bee, some folks said they thought he was great, and some other friends here have said they'd like to give hats to their kids, so I stopped and got some hats. And then when I got back to the manor (on Saturday), I took a picture of the whole clan, with the first Onofre at the upper center in a place of more or less honor. Or something.

They sort of look scary all there together, don't they? (The center is a red fox. He's got the BEST tail!)

In a bit, Day Two of the Norwich Second Visit.
Posted by Bardiac at 1:11 PM