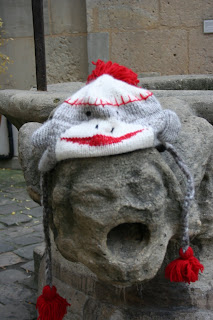 After that, we found our way to the Museum of the Middle Ages, the Cluny, which was high on my list, and totally wonderful. They have lots of stuff from the 12th to the 15th centuries especially, and it's just so darned cool to get to see it! I even took a picture of my hat (now called Onofre, by the way) visiting the gargoyly statue on the outside well thing.

From the Cluny, we went to eat. And that was good! And then we walked to the Pantheon.

The Pantheon is big. It's supposed to be like a secular French monument to all things French, but it sort of did nothing for me. And that's strange, because you know how much I like to visit dead people? Well, there are a LOT of really great dead people here: Voltaire, Rousseau, Madame Curie, Alexandre Dumas! All sorts of people. But there's nothing that struck me as, I don't know, personal? about the vaults. There are these big vaults in these crypts, and they're all basically the same (except for Voltaire and one or two others). It's not like there's a little Chaucer thing here and a Spenser thing there, as in Westminster. Nor are you even walking over Darwin and Newton. Somehow, that walking among them made me happy to visit them, but this just left me cold.

After that, Singing Woman wanted to buy a purse at some special shop, Longchamp. We got lost here and there, but finally found it and she got her bag. (She'd been looking at this purse for a good long time, I guess, and knew exactly what color and size and such she wanted. Once we found the store, it took all of perhaps five minutes for her to buy her bag.)

And then it was getting late, but the guide book SAID that that Musee D'Orsay was open until 6pm, so we headed there. Unfortunately, we got there shortly after 5pm, and they weren't letting people in any more. So we didn't get to go in. We did eat dinner, though :)

But the guide book said that the Louvre was open on Friday evenings until 9pm, so we went there. Unfortunately, maybe because of the holiday, it wasn't actually open. The mall was open, so people could buy stuff, but you couldn't go into the galleries to look at stuff.

Next up, Versailles!
Posted by Bardiac at 1:05 PM