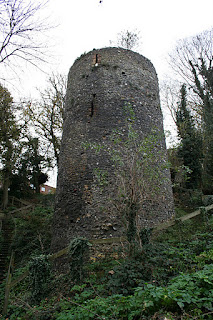 After my breakfast (there's something about the "traditional" English breakfast that's perfect for walking around a lot; it fills you up a bit and gives you energy, and you don't get hungry for HOURS), I walked to the city walls, or what remains of them. If you look on the map, you'll see there's a little grey dotted-line thing down near the bottom; that's what's left of the city walls. I was staying near the rail station, so I walked along the river path, and then over the bridge where there was an old looking tower sitting near the water, and some walls. If you're thinking of York's or Chester's or Canterbury's walls, well, you're not going to be impressed by these. But if you're thinking that you didn't even realize any of the walls had survived at all, then they're wonderful because they're sort of overgrown and lost on this steep hill where the city has put stairs so you can wander up and along the wall and look out over the city and it's just about as perfect a city wall ruins as you could hope for.

These are, in fact, just the sort of city walls that a modern day timid adventurer enjoys, obscure enough that most people won't even notice they're there, but good for getting a bit out of breath on the stairs and feeling like you've found something. Of course, the modern stairs mean that you haven't actually found anything that hasn't been found and put on the map for you, but you get what I mean. 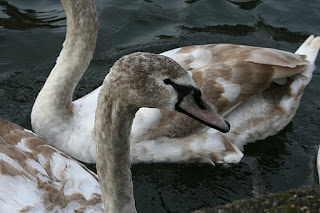 From the city walls, I walked back along the river, past the rail station and over to the east side of the old city. The cygnets were pretty convinced that I had something to feed them when I wandered nearish the edge. I don't think I've ever been that close to a bird that size before. 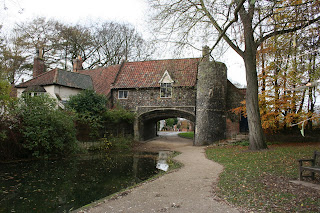 There's an old watergate and ferry building (the watergate is 15th century, I think, but the ferry building is quite new), now a private home, but you can still see where the river was dug out a bit. 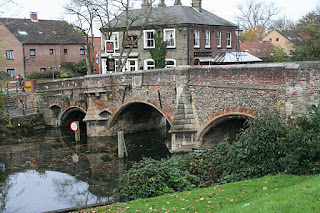 The river was picturesque in that town river with cool bridges sort of way. Along the southern part, there are a couple of footbridges (as well as car bridges), and they're also building a new footbridge across the northern part. (I heard that it was running over cost and time because they'd built one off-site and brought it by barge only to realize that it was 6 or 8 feet short. Oops. I was only told that, so I don't know.) 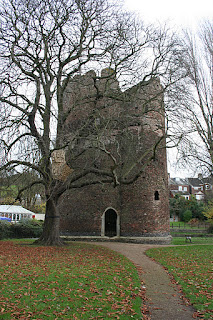 There's also something called the Cow Tower, which was built in the 16th century to provide protection across the river. It was built to house canon, and it's tall enough so that it can see over and shoot at the hill across the river. (I was told that the river had been the protection for that whole side of the town since it was so marshy on the sides that you couldn't have gotten an army across very well or easily. But maybe there was also a wall of some sort. Or not.) And if you look closely at the tree near the tower, you'll see a modern art installation. The sign says it's housing for whatever wants to live there, birds or insects. The juxtaposition made me smile. 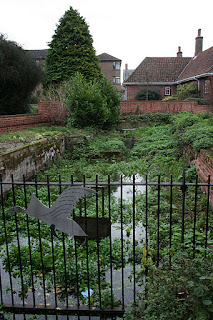 And then there's this. What is that, you ask? Some sort of medieval swimming pool? The sign says it's a "Swan Pit," the last surviving one in England. At which point I turned to my trusted wikipedia, which uses this very swan pit as its exemplar. I guess it's 18th century?

I wonder what the cygnets would think? 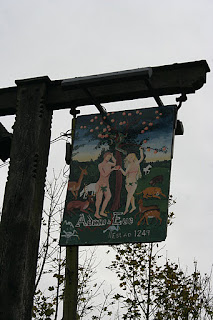 I ended my walk along the river by turning away from the river here. I have a feeling the sign may be a bit newer than the pub. So cool!