Adventures in Norwich, Part the First

I bought my train tickets ahead, so got a good price for once. (See, I can learn new tricks!) And I got a room at a hotel ahead! I was set to go!

I had called for a taxi to pick me up at 8am, figuring a ten minute ride, maybe 15, and then catch my 8:27 train. You know what this means, right? Yes, the taxi came at 8:15 because it was raining and there was traffic, and blah blah. So I got to the station in time to get my tickets and run across the overhead bridge thingy while the train pulled out. Then I had to buy a new one way ticket, effectively doubling my train fare. Lovely, right? But you know, it was okay because I could do that, and no one was going to suffer horribly as a result.

And so off I went on a different train, did a switch at another station, and got there only 40 minutes or so later than scheduled.

Then I started walking and got sort of lost. Let's just say that Norwich is somewhat confusing. I found the visitor information place and got a good map (they always seem to have the BEST maps, and nice people to circle the places you want to go so you can see them easily and tell you what's open when). That's when I found out that one of the places I wanted to go was only open on Friday and not Saturday, so I moved that to the top of my Friday visit list. 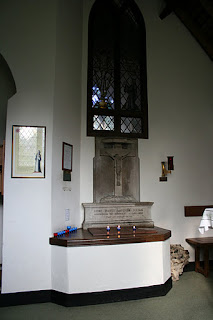 And off I went. And realized that I'd been about two blocks from visiting the Church of St Julian when I'd been lost. And the church is on the way to Dragon Hall (and very close), so I went on in and calmed down a bit. I like to sit in little sanctuary places, though I've never had a spiritual experience in one. Nonetheless, they're calm and quiet, and often quite beautiful in their way. 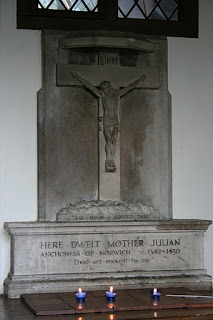 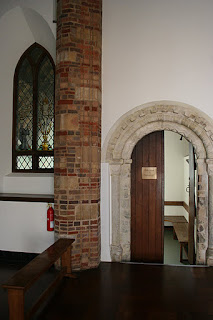 This is the door from within the church to the new shrine. (There's no door from the outside.) It's fairly close up where, say, the transcept would be in a much larger church, but this is a parish church, and fairly small. (I'm now sure how big the medieval church would have been.) It got me wondering why she'd anchored at this parish church rather than at the Cathedral up the hill a bit, or at one of the bigger parish churches in the city. I guess I don't know nearly enough about Julian. 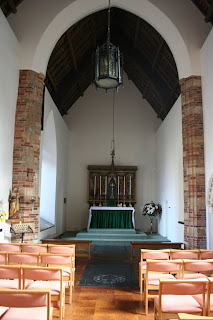 It's a lovely small church, though, with a nice, intimate, quiet feeling. The door to Julian's shrine is just off to the right of this picture, so you can get a sense of the scale of the church and where the cell supposedly was. 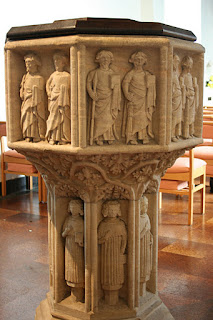 At the back of the church is a 15th century baptismal font that was moved to St. Julian's later (after the war or in the Victorian era, if I recall).

Outside and up the hill was a little shop/library room with two caretakers. I went in and got a couple of postcards and chatted a bit, and learned that it was possible to go into the garden and see the back of the church if you had the key. And these folks had the key, and were happy to lend it to me. So then I had the key and went into the garden. 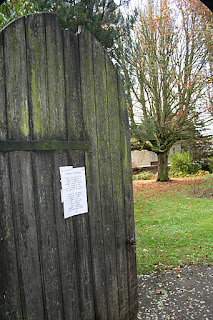 The two caretakers warned me to be careful in the garden because they said there are drug users who hop the wall and then drop needles and such in the garden. I didn't see any, but while I was there, someone else came in using another key (one kept in the church for parishoners, I think) and a dog for a walk, and she didn't seem too overly concerned about the dog finding needles accidentally. 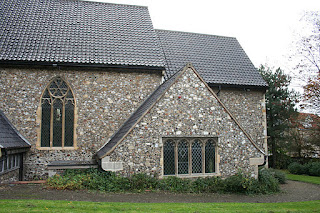 Here's Julian's shrine from the outside.

It was an overcast, damp day; it had been raining, and felt wet, and I wondered if Julian ever felt quite warm in her little cell. Was there a fireplace? (There isn't in the new built shrine, but why would there be?) Or maybe a brazier? (It might not take a big fire to warm a small space.)

Clearly, I'm not cut out to be an anchorite.

And next, on to Dragon Hall!
Posted by Bardiac at 7:35 AM