Where I Went Today 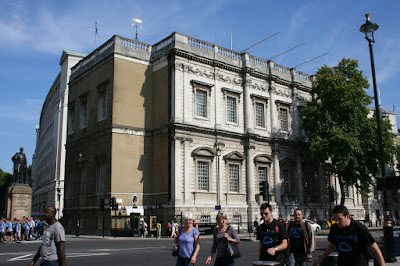 Amazing. I knew some of the history about Inigo Jones (and really, is there a better name?) designing it, and such. But I hadn't realized that Charles I was executed right in front. Lots of history here. They have a great audio guide. And of course, the building is just beautiful, stunning. 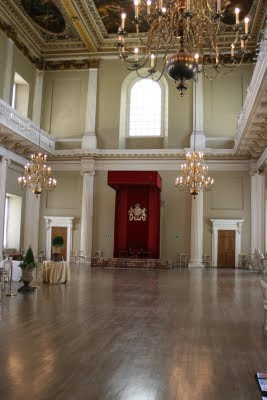 I got a late start this morning because of the laundry. I woke up early, and went down about 5am, and couldn't get the washing machine to work. I'd already loaded my laundry in, though. Then I saw the sign that said the machine's shut off from 10:30pm to 6am. So I went back up, and down again at 6pm. I tried several times, and then decided I was SOL, and then wondered if there's a seasonal time change, and if I was somehow caught up in that. So I went back down at 7am, and within a few minutes, I got it to work! But then I noticed that the sign says it takes a minimum of two hours (TWO HOURS, PEOPLE!) to run the wash machine. So I went back up, and came down later to put it in the dryer, which also took its sweet time. And then it was time to forage for lunch and go explore.

I'd planned to go to the Banqueting Hall and then on to the National Portrait Gallery, but I took longer in the Banqueting Hall than I'd thought I would (and it was worth every minute!), and got waylaid by the Horse Guards museum on the way, and had to go in. (I admire horses a lot. What can I say.)
Posted by Bardiac at 2:20 PM