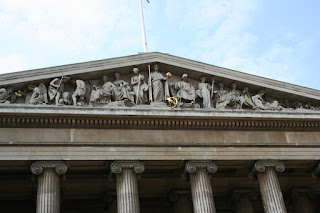 The British Museum. And that's where I spent my day today.

It's like walking into my art history book, the early one. There's the Rosetta Stone. And the Parthenon Marbles. And Egyptian art. It's truly overwhelming. There's just so much there that it's hard to imagine as you move from room to room.

I went thinking that the things I most wanted to see were the Parthenon Marbles and the Sutton Hoo hoard. Because of the layout, you walk through a fair bit of exciting stuff before you get to either. The first thing I saw that really got me was the Rosetta Stone. I guess I didn't realize it was there, but it was. And thinking about how it was used to figure out heiroglyphs and stuff, it just blew me away. And then, of course, I laughed inside thinking about the joke about the American who wants everything in English because if it was good enough for Jesus... you know, that one. 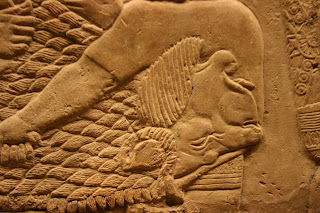 I saw these amazing Assyrian bas reliefs. There were two walls of a lion hunt. The first wall was going on the hunt; the second was coming back. Apparently, the lion hunt was quite successful (unless you're a lion, in which case they were horrid), because the men were carrying all sorts of lions. Look at this one on the left. Isn't the detail of his tongue sticking out just amazing? 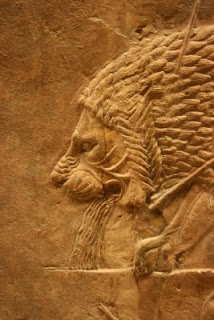 And this one. He's all wounded, and spewing blood or something, and it's horrific, but also beautiful. I just looked and looked at these bas reliefs, and the details made me wish I could touch them and all, because there was something so immediate about them. (But of course, I didn't, so I didn't get arrested. And that's good.)

It just amazes me that you're allowed to take photos in the museum. And they didn't even have flash rules. (But I mostly went without flash, since the flash tends to wash out the shadows on this sort of thing, and then you can't see it really well.)

Finally, I reached the Parthenon Marbles. And I'm sad to say, they just aren't as wonderful as they are in pictures, especially of pictures set in the context of the Parthenon itself. So I was a bit disappointed (but still, the Assyrian lions!).

I felt sort of the same about the Sutton Hoo hoard, alas. And I didn't get to see the round reading room, because it's used as an exhibit room right now, for an exhibit of medieval relics, and so is covered up. I know! But still, Assyrian lions!

And there were mummies, too. Mummies sort of weird me out. I almost get sick thinking about people using "mummy" as medicine back in early modern times. Bleach! 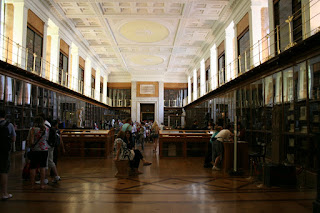 Something I notice at museums: I admit I take tons of pictures, but only of stuff I think is really cool. I don't get people who walk by, take a picture without even looking, and then do the same, again and again.

I love this sort of library room. It's like a fantasy library to me, though probably not especially convenient.
Posted by Bardiac at 11:57 AM