Another day, more art. And I say that with a smile.

I spent much of the day using my "Royal Day" pass to the Queen's Gallery, the Royal Mews (horsies!), and Buckingham Palce.

There was a gorgeous Dutch landscapes exhibit at the Gallery, and it was, well, gorgeous.

The Mews were cool. I tend to like horse stuff a lot, so that's that.

Buckingham Palace was big, really big. Some of the rooms are absolutely beautiful. The music room actually looks welcoming, in an 18th century way. I could imagine actually being happy listening to music there.

There were two special exhibits. One, the wedding dress. I'm sure you've all heard about that. It was as elaborate and beautiful in person as on TV, though the disembodiedness of it was strange.

And then there was a Faberge collection. Holy cow, there are some beautiful, amazing pieces. And then you look at when they were collected, some of them. The ones collected after the Russian revolution, there must be a story behind each of them, I bet. And also, the ones collected in the period before WWII, during what in the US was a depression. It's hard to imagine the amount of money spent on a little, tiny, decorative object when so many people were having such a hard time just getting by.

I've been trying to do my laundry since I got home. It's two and a half flights (yes, I know, that doesn't make sense) to the basement, and I've been going up and down, down and up carrying my load of laundry, but each time, the washer has been full and on. Except this time, there was a woman just loading it. I wanted to beg her to let me put mine in instead.

Why is it that other people dare to want to do their laundy at a time that inconveniences ME?

So now I have to decide: stay up and put mine in at about 10pm, and then stay awake to put it in the dryer and pull it out. Or go to bed early, and hope to sleep quickly so that I wake early and get it done then. I think the latter.

Jet lag is causing me sleeping weirdness. I can't seem to get sleepy and fall asleep between, say, 7pm and 2am. And that's meant going to sleep at 2am or so, and waking up later than I'd like to get a start on the day. But I think it's caught up with me, because I'm pretty sleepy now, at 8:30 about, and if I go to sleep soon, it will feel great. And I'll wake early. 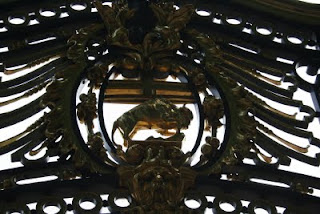 ps. This is from a gate at Green Park, right near the big Buckingham Palace gates. This isn't a great picture, but how come there's a bison and a sort of gargoyly face on this gate?

Thanks to the internet, an answer! It's the Canada Gate, a gift from Canada for the memorial for Queen Victoria! 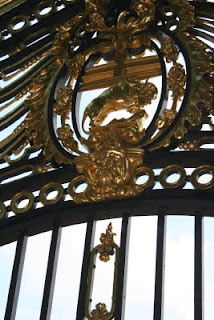