Yesterday, I was at the Tower of London, the oldest tower (the White Tower) of which was built "by" (why do we use "by" for someone who gave an order and probably didn't do a bit of the labor?) William the Conqueror after the Norman invasion.* But even that was recent compared to the wall built by the Romans around Lundinium in the area.

Today, I finished up the two day Big Bus tour of London ticket by getting on a barge thing on the Thames and riding up to Greenwhich. I got to see the New Globe from the river, which was a far better view than I'd had before. It took longer than I'd thought it would, so I revised my plans a bit from the Westminster Cathedral (which you totally know is high on my list, but which I expect to take a long time at) to something a bit more modest, the Cabinet War Roomwhere Churchill's cabinet had done their war work, especially during the Battle of Britain and then under the rocket attacks.

So there's the connecting theme, in a way: invasion, successful compared to invasion, only threatened. (Horribly threatened, though.) 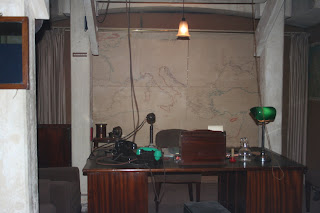 I'm not a big war buff, not of any war, but the War Cabinet Rooms were fascinating. I can't imagine working there while bombs and such went off above. The Churchill museum is in the same place, part of the underground complex, and also pretty darned interesting. They had a bunch of the medals he'd been awarded. Now, you know me; I want to have seen his George (go RedCrosse!), but it wasn't there.

I'm downloading a bird guide for Britain now, hoping I can get a clue about some of the birds I've seen. I've seen at least two gulls, starlings, some pigeons, and a cormorant, but not much else yet. (The gulls, compared to, say, SF Bay, seem sparse.)

*Does everyone else use jokes about a bunch of guys named Norman to try to get students to remember 1066? Just me?
Posted by Bardiac at 2:45 PM