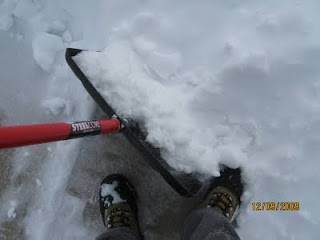 This is a self-portrait of me digging out. Yes, it snowed. I made the mistake of opening the back sliding door to toss out some seed for the juncos, and a load of snow fell into the house (it had been built up between the glass door and the screen door). Then the ice made the screen door come off its track and it's too iced up to get back on.

I don't think we even had a blizzard. (I looked up, and a blizzard is supposed to have winds of 35mph or higher, and mostly we didn't.) But it was darned windy and snowy anyway. Compared to the high Sierras, of course, we barely got snow. But it was plenty to dig through.

I put some seed on the deck for the juncos, and later, I saw a Downy Woodpecker actually land on the flat surface and pick up a big peanut piece. I think the hanging feeder and suet thing were just too windy for it, maybe? Anyway, I haven't seen Downy's land on the deck surface before. I'm guessing just because it's cold and windy doesn't mean you don't have to eat if you're a bird!

And now, back to student papers.
Posted by Bardiac at 11:30 AM