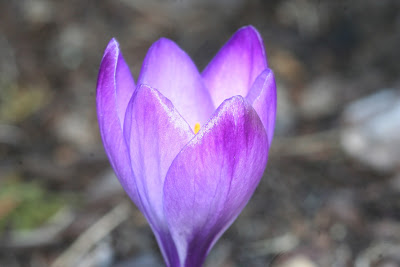 It's sunny out, and the first morning I've been here to really enjoy spring feeling like spring.  It wasn't quite warm enough for coffee on the deck (though, now that I think about it, with a blanket it probably would have been fine).

I have a small patch of front yard near my mailbox where I've put crocus bulbs in a couple of years ago.  And finally, they've totally taken off.  (I should probably dig them up this fall and move some around so they don't get over crowded.) 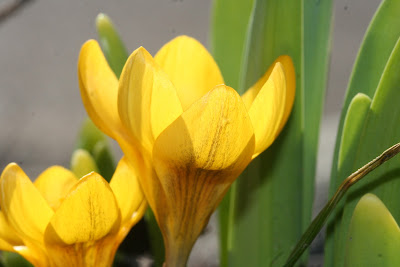 This spot gets morning light and light through most of the day, so it's early for my yard, once the snow starts melting.

Today, because I was out and about in midmorning, the sun was playing on the colors really beautifully.

So I took a bunch of pictures in various ways trying to capture some of the ways the light was coming through and the shadows were working. 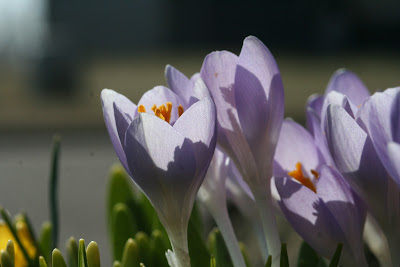 I was out there, lying on the ground, taking photos and a guy jogged by on the other side of the street (running against traffic, except it's a cul-de-sac, so there isn't much traffic).  I didn't even realize he was there until he'd gone by, so I didn't say anything.

And then he circled around, and came back on my side, and I said hello, and he practically jumped out of his skin.  I guess he'd been focusing on his running and hadn't noticed me lying there when he ran by on the other side, and then I was sort of behind a plant and the mailbox as he came on my side. 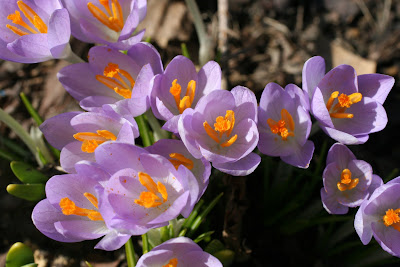 So these are my favorite of the morning pictures.  I like the first one because it captures a sort of glow look (it's a bit more in the shade), and you can also see some of the veins in the petals.

The second one is more because it's a beautiful flower, with lovely darker coloring coming up.

The third one I like for the way you can see shadows of the stamen in one flower, and the stamens of other flowers. 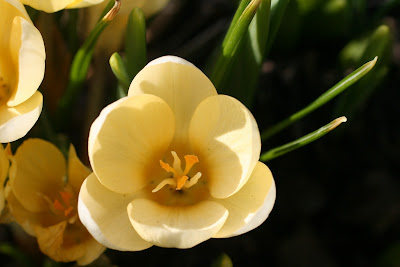 The fourth one (just above and to the left), I like because the pollen on the inside petals really appeals to me.  It's like delight in disarray, perhaps, except the flower version.

And this final one just seems like such a perfect flower, and a perfect show of threes and six in the flower.

So finally, it seems to be spring, and all I want to do is go play in the garden or (when it's a bit warmer) take a bike ride.  But what I really, really need to do is grade!
Posted by Bardiac at 8:56 AM