Last night, my athletic team went for a team dinner (with family folks) to a pizza place an hour or so outside of town (good pizza is worth a ride). And then we took the scenic ride home, along the Lake of Charlemagne's Son, and through a couple small towns there, where my friends S and L pointed out their favorite restaurants and snack places. We stopped finally for an ice cream cone at one of these places before finally heading home.

From the back seat, the road looked well-paved with a good shoulder, and didn't seem to have many steep hills, so this morning, I decided to drive back out and ride my bike along the lake from one small town up to a bakery in another small town and then back, and if I felt like it, up a bluff to the birthplace of a Famous Local Author.

When I got to the Town of Charlemagne's Son, I saw a tourist information place, so I stopped and went in to ask about riding trails or roads, and about the birthplace stuff. I like these sorts of small town places because you invariably get to talk to someone who loves the town and the area and will share hints about fun places to see and go. And sure enough, that was the case today.

It turns out, we're from the same area, and she's from very close to my college town, so we chatted a bit more, and she gave me some pamphlets and information and told me I could leave my car in their lot while I went for my ride. So off I went.

The road was, indeed, well paved with a good wide shoulder, but it was a bit hillier than I remembered from the car.

Here's the thing, though. I'm really happy to say that I feel pretty confident on the usual hills around here, so I wasn't overwhelmed by these, and had a really good ride going up and down. It's a surprisingly good feeling to have, this feeling that the hills around here are okay and that I'll have fun and be fine for 20-40 miles on them (so long as the paving is decent and quiet or the shoulder wide enough). I don't know how to explain it, because it's a really new feeling for me to have this sort of physical sense of myself.

I wasn't the only one who went out for a ride today, though. Every other biker in the area was on the road, too, except they had motors on their bikes, often big, very loud motors. And they went a whole lot faster. They also don't look silly wearing lycra and all. But I'd nod at them, and mostly they'd nod at me, and we seemed to have a sort of okayness about each other. I'm sure some of them were thinking that even a bike without a motor is better than no bike at all, and I was certainly thinking that they looked like they were having almost as much fun as I was.

Then I reached the bakery. In a town (of the Stone a Woman who didn't want to be Forced to Marry Jumped off of) with a double digit population marker, there's this absolutely great bakery. I parked my bike on the porch next to a rocking chair and went in to see what was what, and there were pies, and cookies, and this and that. I asked for a pie suggestion, and the bakery guy suggested Passion Fruit Cream Pie, and, as he said, when was I going to have another opportunity to have Passion Fruit Cream Pie? So I did, and he was right. It was refreshing and sweet without being at all cloying, light, flavorful, and every so foodgasmic. I ate my piece on the porch in the rocking chair, and people coming up to the bakery commented on the happiness of my face eating the pie. My pie hole was very pleased, that's for sure. And it showed.

I also bought some cookies to bring home, three each of lavender/ginger sugar cookies and chocolate oatmeal cookies. (The nice bakery guy gave me two bags so I could fit the cookies in my jersey back pockets.)

And then I headed back, and eventually reached my car again. 26 miles, and my legs are tired.

I took a lavender/ginger cookie in to give to the woman I'd chatted with at the tourist information office, to thank her for her help earlier. 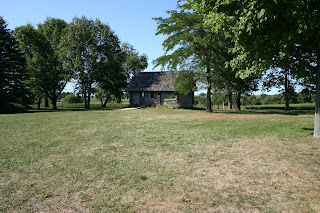 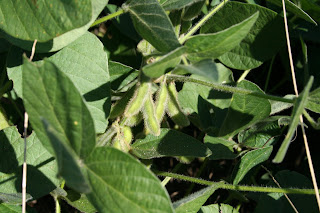 Around the Not the Real Cabin are fields of corn and soy (I'm guessing soy wasn't a big crop in those days?) I grew up in the suburbs, and though we grew some veggies in our yard, we didn't grow soy. In fact, I don't think soy is a big crop where I'm from; at any rate, I've never seen soy up close. Usually these days, I see a big field, but I don't feel right about getting out of the car (or off the bike) to get off the road and go to someone's field. Here, though, the field was right up next to the tourist area, so I did go over to look at how soy grows. And I even took a picture. To me, this seems like the bean pods are still pretty immature, but only a couple weeks ago soy was flowering around here, so they seem to grow pretty fast once they get started.

I thought I'd share the picture since I'm guessing a lot of folks haven't seen soy growing up close and personal. This blog is nothing if not educational, right?

ps. Since coming home, I've eaten one of the lavender/ginger sugar cookies. They sound weird, but it sure tasted good!
Posted by Bardiac at 6:39 PM