This week is full. Today's morning meeting was mostly interesting, though there was no coffee, and I was working on short caffeine (my own fault for assuming there would be coffee).

But, at one point we were supposed to be discussing problems on campus, and one of the folks at the table said that a problem is that all students don't learn in the same ways, so faculty shouldn't lecture all the time.

Stupid me, I thought this was a meeting about identifying problems, so I said that I thought there was a structural issue here, and that it was really hard to teach a class with 85 students without lecturing.

And I think this is true. Our larger classes have "nailed down" seats. They may rotate a bit, but the motion is limited and they're set in rows with some sort of writing surface in front of them. Want to do group work? Someone is going to have to sit on the desks. You can do pairs, but it's hard to not have the same pairs.

And complicated group stuff, in a class of 85? How many times will you explain the instructions that everyone needs to have a piece of paper and a pen/pencil? At least six. When the directions get more complicated, it goes even more slowly.

Well, she turned on me, at which point I realized she's from the Heaps of Learning Intensity Group (HOLI-G) (okay, that's a psuedonym, but you get the point), and started talking about the HOLI seminars we should attend to teach us not to lecture all the time.

So what could I say? The last time I lectured in a class was in grad school, and it was either a 250 person survey of the middle of the English lit history thing, or a 200 person lower level Shakespeare class. In either case, I didn't have strategies to make a big class work well without lecturing (especially given the structures of lecture halls), nor the power to say that I wasn't actually going to do the lecture I had the opportunity to do to get a little lecture hall experience.

But day to day, I'm fortunate not to teach 85 or 200 or 400 person classes, and usually I teach in rooms without nailed-down chairs, so I can get students to move around, and I can use discussion, focused group work, and all sorts of other stuff to help students learn. (I've had students sit on the tables when necessary, too, but it's not comfortable and doesn't work really well over the long haul of a semester.)

But my fortune in class size comes at the expense of some other folks who do teach large lecture classes, because that's the reality of university life. My 35 person lit classes help support the 15 person writing intensive classes, but the cost efficiency on campus comes from large lecture halls full of students with one professor standing in front.

So what could I say? I didn't say anything else because I didn't think it would be productive.

But now I wonder what sorts of great strategies she's got in mind for teaching great classes of 85 or more students in nailed-down seating. And, alas, I'm not going to go ask her, because I don't actually like to be treated like I'm an incompetent for making a suggestion that I don't think was all that idiotic.

And yes, inside I was thinking about the fact that one of us has actually lectured to 200+ people, and one of us has done visiting lectures, and one of us plans out and teaches classes all bleeping semester that most students seem to have found pretty decent. And a few students find them more than decent.

That doesn't mean I wouldn't like to learn to be a better teacher. But I don't think someone who reacted as she did will really help me do that.

Oh teaching wisdom of the internets, what are the best strategies you've learned for teaching in large lecture halls with 85+ students?

(Yes, if I were a member of the HOLI-G, I'd talk about "promoting learning" rather than "teaching." I've become a curmudgeon, haven't I?)

But then, later, I had a less official meeting with Harriet, Columbia, Don, and Angel. 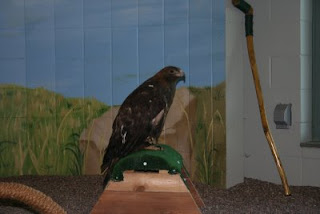 This is Don. He's a Golden Eagle. See the dark eye? Cool! Don got whacked by a car and failed the test to go live in the wild, so he lives at a center not too far by car. 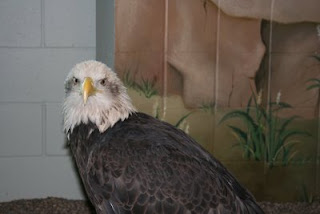 He lives with Harriet, Columbia, and Angel, who are Bald Eagles, female, and thus (so the docents said) larger than Dan (because they're female and female eagles are bigger than males, though Golden and Bald eagles are pretty close to the same size; also Dan was from California, while the others were from more colder climates, which tends to correlate with larger size, too). Note the lighter, amber/yellow eyes? Way cool! The eagles spend part of the day in a viewing area, but because they all like the big window seat, they get moved around. So I'm not sure which bald eagle this picture shows. 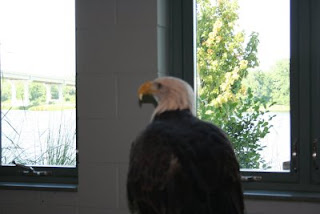 The big windows look out over the Big River, so you can see why any eagle would want to sit there.

Meeting these four probably wasn't as productive work-wise, but it sure made me feel better about life.
Posted by Bardiac at 7:01 PM