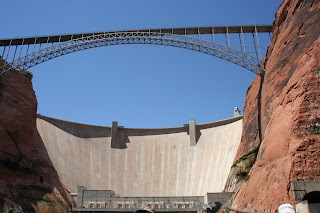 Having spent most of a day at Bryce, we had a picnic, and then went to the Glen Canyon Dam, where we got on a rather large raft (I guess that's relative: for a river, it felt large; on the ocean, it would have felt tiny) and went (mostly motoring) down to Lee's Ferry.

Still, it's the Colorado River! 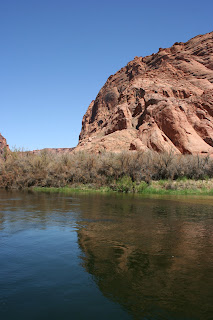 Along the way we stopped and were able to take a short walk to see some petroglyphs. 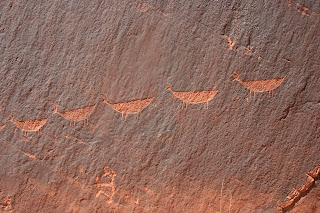 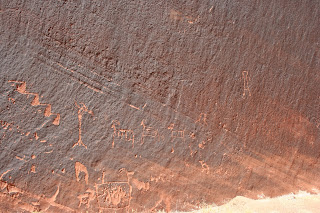 And then there were some desert bighorn sheep! 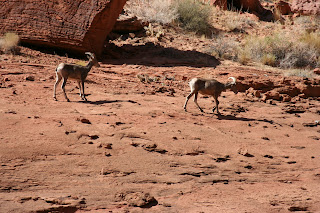 At this point, a moment of amusement.  When we saw the bighorn, they were far away.  Now, all along, I'd been carrying my 100-400 zoom, with some technology that's supposed to keep things a tad steadier.  That meant that my bag was way heavier than it appeared, to the extent that when someone helped me get in or out of the shuttle by holding my bag, they noticed and made jokes about bricks and such.  With the bighorn in sight, I pulled out my big lens and did a relatively quick change, and voila, I got a bunch of sheep pictures.  And everyone knew the secret of my heavy day pack.  (I also shared around my binoculars, of course.  But they aren't nearly as heavy.)

Not long after we saw the sheep, we saw some horses.  The guide person said that they were semi-feral horses, with brands, that belonged to folks on the Navajo reservation.  (Does everyone have the Stones' song in their head now?  I do!) 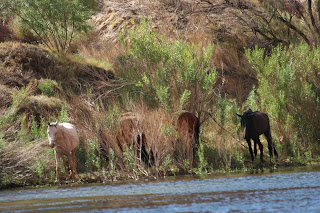 And now you can see what a difference the lens makes: 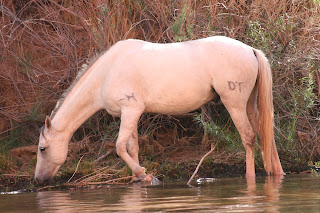 I like this picture a lot, mostly because I really like that it somehow caught that left front hoof coming up, with water. 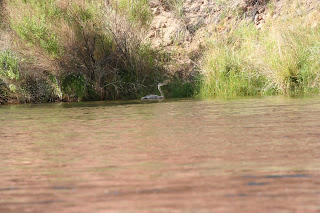 And that was our trip on the river.  At Lee's Ferry, we got off and got on our shuttles.  Other folks, though, get on there, and take either five day or longer float trips.  I'm told the five day trip folks have to hike up out of the canyon at the end, which seems like a LONG walk!  We didn't, though.  On the other hand, we also didn't get any rapids or white water.  On the other hand, I was able to take my big lens along and out.

Next time: The North Rim of the Grand Canyon.


In case you're wondering, we went on a trip with the National Geographic organization, which was run through a company called Backroads.  And I have to say, the guides and geologist were all fantastic.  I went with my Mother, who's 81.  When we signed up, the information we got said that we needed to be able to walk at least 3 miles.  But I couldn't convince my Mom that walking a mile in a half hour on the treadmill at her retirement place was enough.  So she wasn't able to keep up, and we ended up going on shorter walks, or slightly different, easier walks, rather than on some of the planned hikes.  But in every case, the guides were super helpful in giving us some alternatives that worked for her without holding back the other guests.  I totally recommend either the National Geographic tour thing or Backroads.

(My Mom was funny: she mentioned to me that she'd never realized people went hiking and biking to the extent that the guides and other guests do.  Imagine, someone who goes out and does athletic stuff for fun.  If only she'd known someone who does that?)