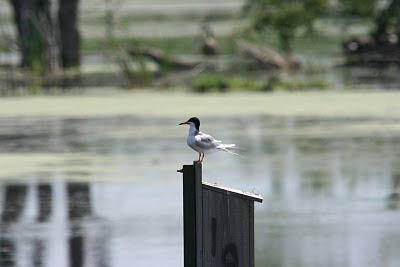 (Forster's Tern)
I took a long drive to a big marsh yesterday, listening to a book on CD about the Bayeux Tapestry along the way. First, did you know that part of the precipitating stuff that led to the Norman invasion in 1066 was the death of Edward the Confessor? Yes, that Edward the Confessor, the one Malcolm visits in Macbeth. And then the book mentions that one of the resistance fights William had was with Malcolm of Scotland, among others. Yes, that Malcolm.

See, I'd never really gotten the timing even a little, but now I sort of have it.

Another thing this book talked about was a French scholar in the early 19th century who went to England to look at Old French mss and found the ms to the Song of Roland from the 12th century. I don't know if that's so, because I'm not finding anything on the web that cares about that sort of thing in the stuff on the Song. Anyone know?

I guess the thing is, that blows me away. It's like Gawain being lost for so long, or Beowulf. Or, for that matter, the Bayeux Tapestry itself. Unlike Chaucer's Canterbury Tales, which has been more or less around since it was around, and referred to by others and such, these just get lost for a while. Do they influence folks? How?

I'm still reading history. I'm a slower reader now than before my eye surgery, and it sucks. But it's good to be able to read at all.
Posted by Bardiac at 2:44 PM