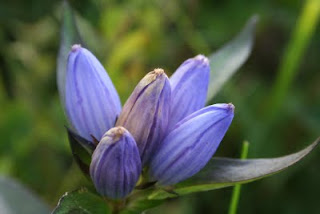 Yesterday afternoon, I was on a ride with a (mostly) women's group I like to ride with. They're good folks to ride with, considerate, good conversationalists, reasonably careful. They know lots of the roads around here, so they've taught me some good back roads to ride.

We did pretty much a straight out and back on Joe's River Road, one of my favorite rides because we wanted to go fairly quickly on a short ride, since it gets dark earlier and earlier these days. (I think Ceres is getting cranky.)

And as we were almost to our planned turn around, one of the women said she'd just seen an uncommon flower. So I asked her to point it out to me when we went back, and we all stopped and looked at the flower and she told us a little about it while the mosquitoes had dinner. (If I were really from the midwest, would I have used "supper" there instead?)

Today I went back with my car and my camera (my bigger slr and the little biking one) to take some pictures. The flower is, according to my fellow-biker, a Gentian, maybe a Bottled Gentian. It's not really, really rare, but pretty uncommon in these parts.

I have to say, one of the coolest things about this group is the unexpected fun of realizing that someone's a master gardener or something and willing to share their enthusiasm. So, yesterday, I learned to see a wildflower that I'd never noticed or seen before. It was a good day.
Posted by Bardiac at 6:16 PM