Oriole in the Snow

I got home this afternoon a bit late.  It had been snowing all day, and it showed. 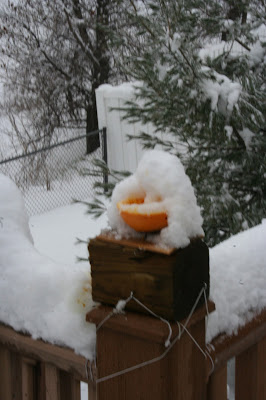 I went to take a couple of pictures on the deck.  This is a half an orange that I'd put out that morning for the house finches.    You can tell that it's got a lot of snow piled on it, but where the snow isn't, the birds had eaten a bunch of the orange.  So I cleared the snow off it, and took a couple other pictures. 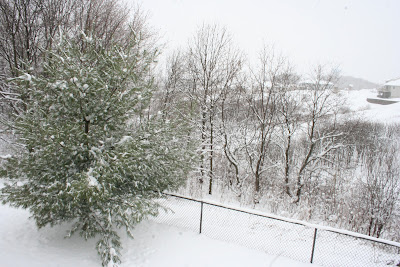 This is basically the same picture I took earlier today out the back of the deck, but as you can see, there's considerably more snow, and it's heavy, wet stuff that's sticking to branches.  (Trees are falling, I've heard, and power's out in some parts of town.  Ugh.)
Then I went back out the front of the house and dug the driveway out wide enough so that I can get my car in and out.  I'd gotten it into the garage, but figured if it snowed even two or three more inches, I'd have trouble in the morning.  So to avoid that possibility, I dug out, but it was heavy stuff, so I dug a bit wider than my car rather than trying to dig the whole driveway.  It's heavy, nasty, wet snow, but it went fairly quickly.

And when I went in, this is what I saw out my back sliding glass door! 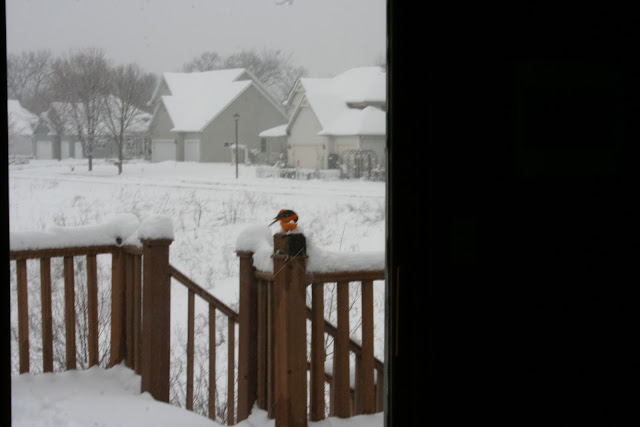 It's an oriole!  In the snow!  I put out more suet, too, and before long, I was able to see two orioles in the yard (both male), a pair of cardinals, several tufted titmice, a chickadee, a brown thrasher (I saw one earlier in the week, too), and a couple of song sparrows.  Weirdly, I didn't see the usual house finches, goldfinches, or juncoes.  (It was getting late, though, so maybe they had already eaten their fill.)

I'm pretty jazzed to see the orioles up here already!  (I made a new orange holder this year.  It's a thin piece of wood with three nails through, sticking up, screwed to a big block of wood with some nails in there on the sides to tie it down.  It seems to be working pretty well.)
Posted by Bardiac at 7:16 PM