Now is the Sprinter of our Discontent...

Over at Historiann's place, it's "wring."  Here, folks are calling it "sprinter."

Here's what it looks like out my back this morning. 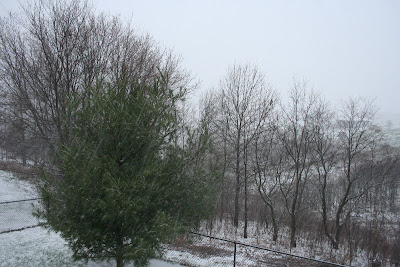 It wasn't a lot of snow when I took this, but more is falling, and we're due for a fair bit.  (And when I say "fair bit," remember that the upper midwest doesn't usually get anything like the snow mountainous areas do.)

I like "sprinter" more than "wring" for a couple of reasons.  First, it sounds more hopeful.  Instead of wringing my hands in frustrations, I'm sprinting towards summer.  Second, it fits rhythmically into all the "winter wonderland" and other winter verse stuff.  That's important!

There's even a bit of fun to the sprinter craziness around here. 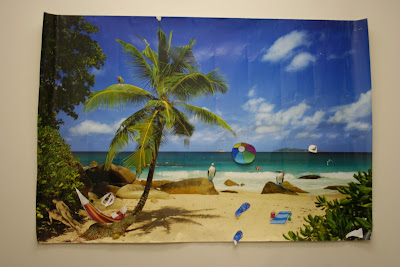 Someone has put up a poster of a beach scene in one of the elevators, and people keep adding bits to it.  So the original poster was just there, and then there was a "Nemo" type fish, and a beach blanket, ball, and so on.  My favorite is the blue-footed boobies.  Or maybe my favorite is Adam and Eve lying together.  If you embiggen the picture, be sure to look at the white bit on the island off in the distance.

I'm sure putting up big posters in the elevator is somehow against someone's rules.  But people just keep adding, and it's been there a while, so I think the powers that be are in sympathy.

Outside my office, though, there is snow, and it's at that beautiful sticky point. 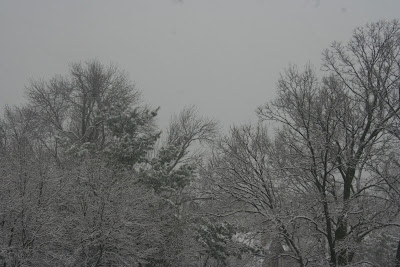 If this were January, I'd be enchanted by the way it sticks to the trees and such.  It's really beautiful in a stark winter way.

In a spring way, though, it's something all together different.

This post brought to you by the letters W, T, and F.

Email ThisBlogThis!Share to TwitterShare to FacebookShare to Pinterest
Labels: Spring