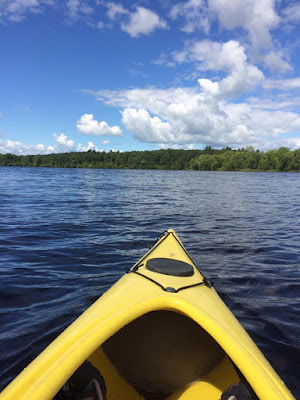 I did a solo kayak paddle yesterday, from a town just up the river, to a little lake-ish area in my little city.  I think it was about five miles, and took me an hour and a half, not working very hard (but with the wind against me). 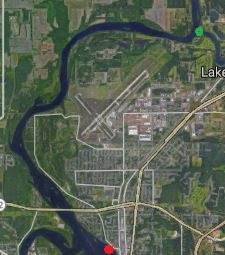 I put a green dot at the put in place, and a red dot where I took out.  The shore line has lots of houses and boats along the river in some areas, and not in others, so some places look pretty pristine, and some less so.  Still, it's a beautiful river, and was good for paddling for me.  (It's not white water, at all, but there weren't too many big boats to worry about.

My neighbor had offered to pick me up any time he's around, in his pick up.  So I called him when I was on land again.  It worked out GREAT!

(To the right of the green dot, it looks like that's another river coming in, but it's really a little lake, separated by some land, with probably an open pipe under the road between the little lake and the river.)
Posted by Bardiac at 8:41 AM