This morning, I got a later than usual start, so it was about mid-morning when I chanced through my bathroom again, and happened to catch sight of a Sharp-shinned Hawk sitting on a birch tree in the neighbor's yard, about 5 meters from my window.  (Unfortunately, while I was quick enough to grab my camera and telephoto lens, I wasn't quick enough to think to remove the screen from the inside of the window, so the picture has that soft focus look of going through the screen.) 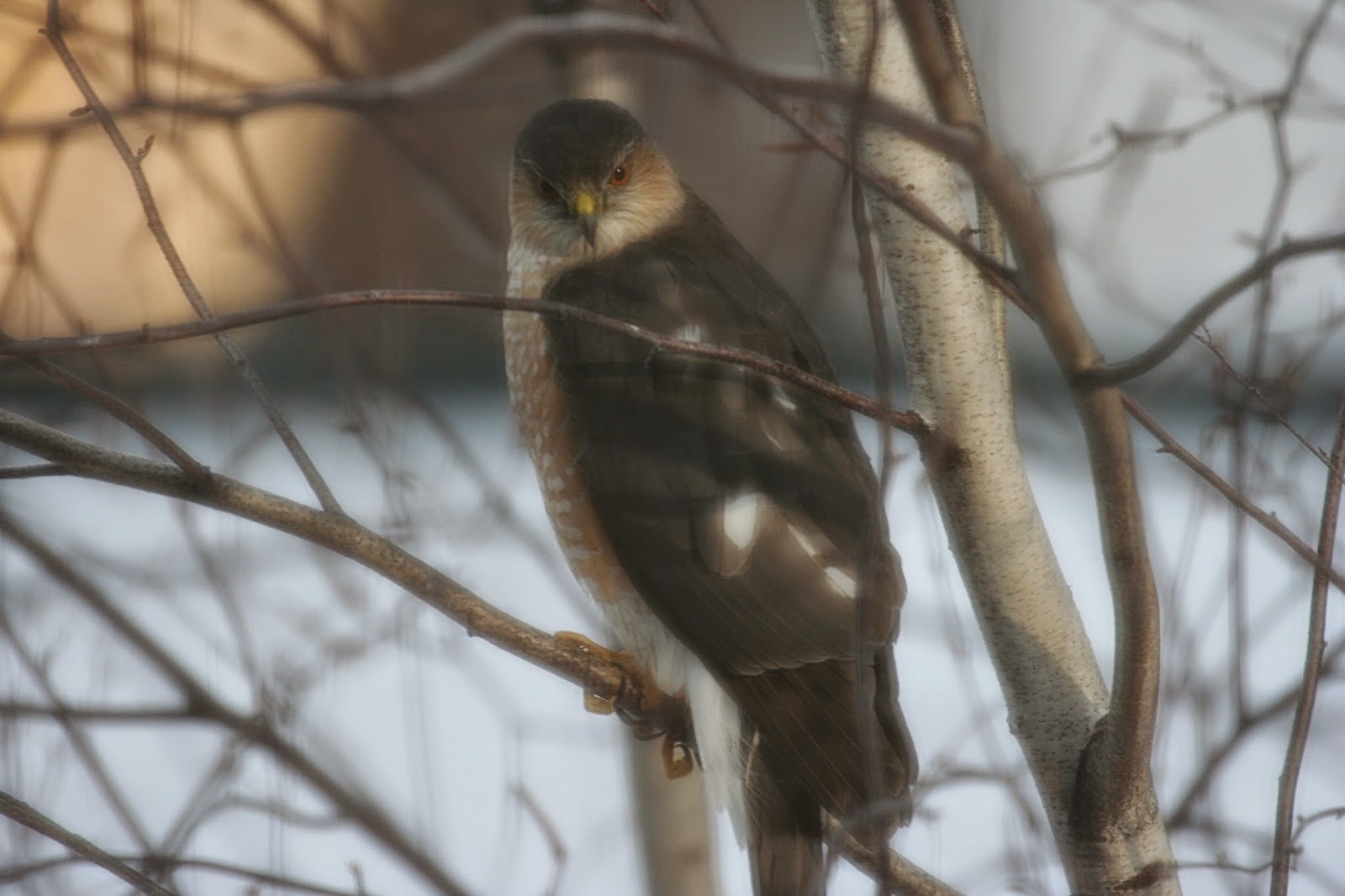 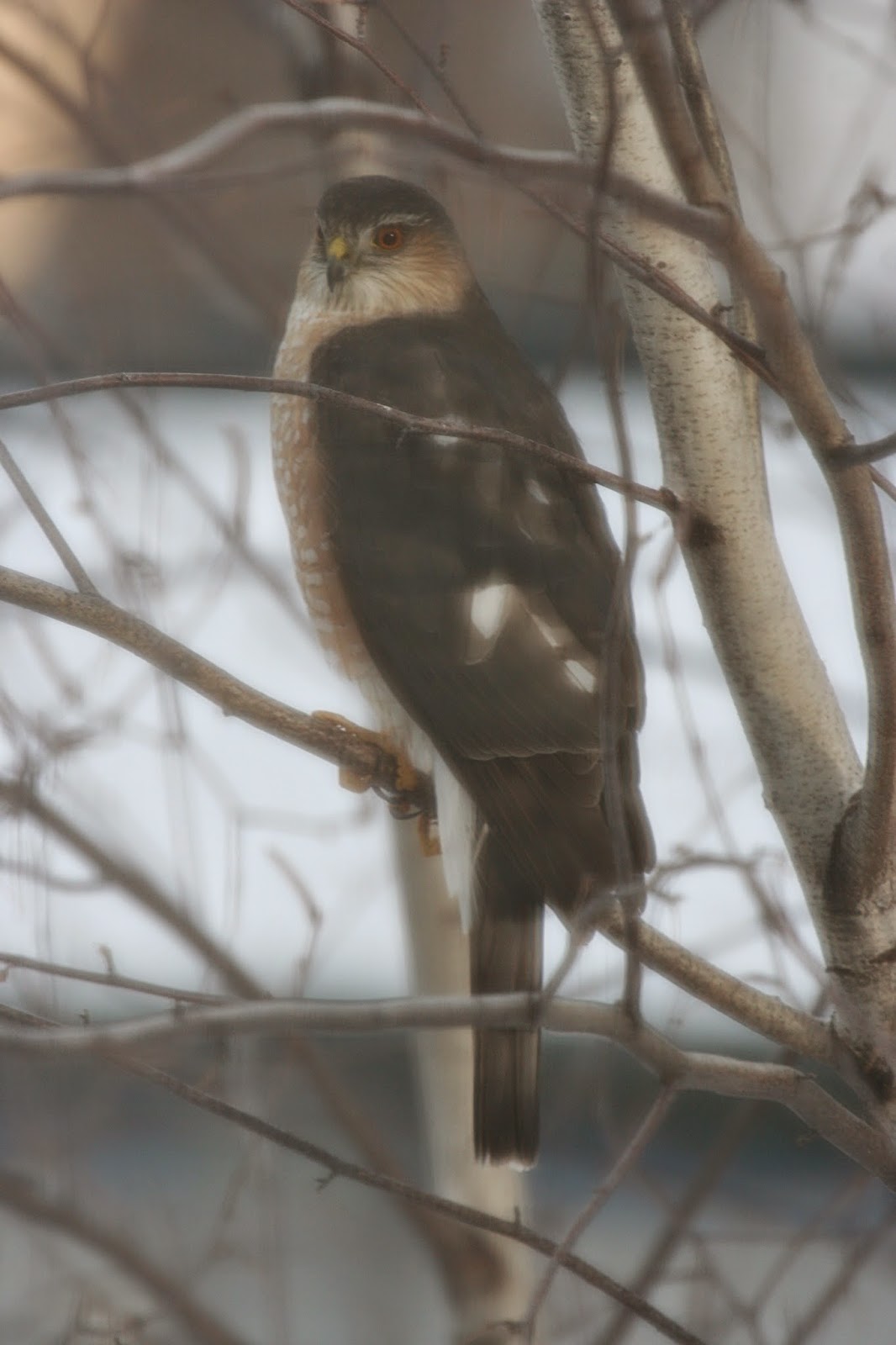 In this one, you can see his very squared off tail, which, I've read, is one of the ways you know it's a Sharp-shinned, rather than a Cooper's Hawk.  Also, it was about the size of a Blue Jay (which is what I thought it was at first glance).  In the second photo, he's looking into my yard, in the vicinity of a pine tree.  He took off in that direction a moment after this photo.
A bit later, I happened to glance out another window, and saw this just beyond the pine tree. 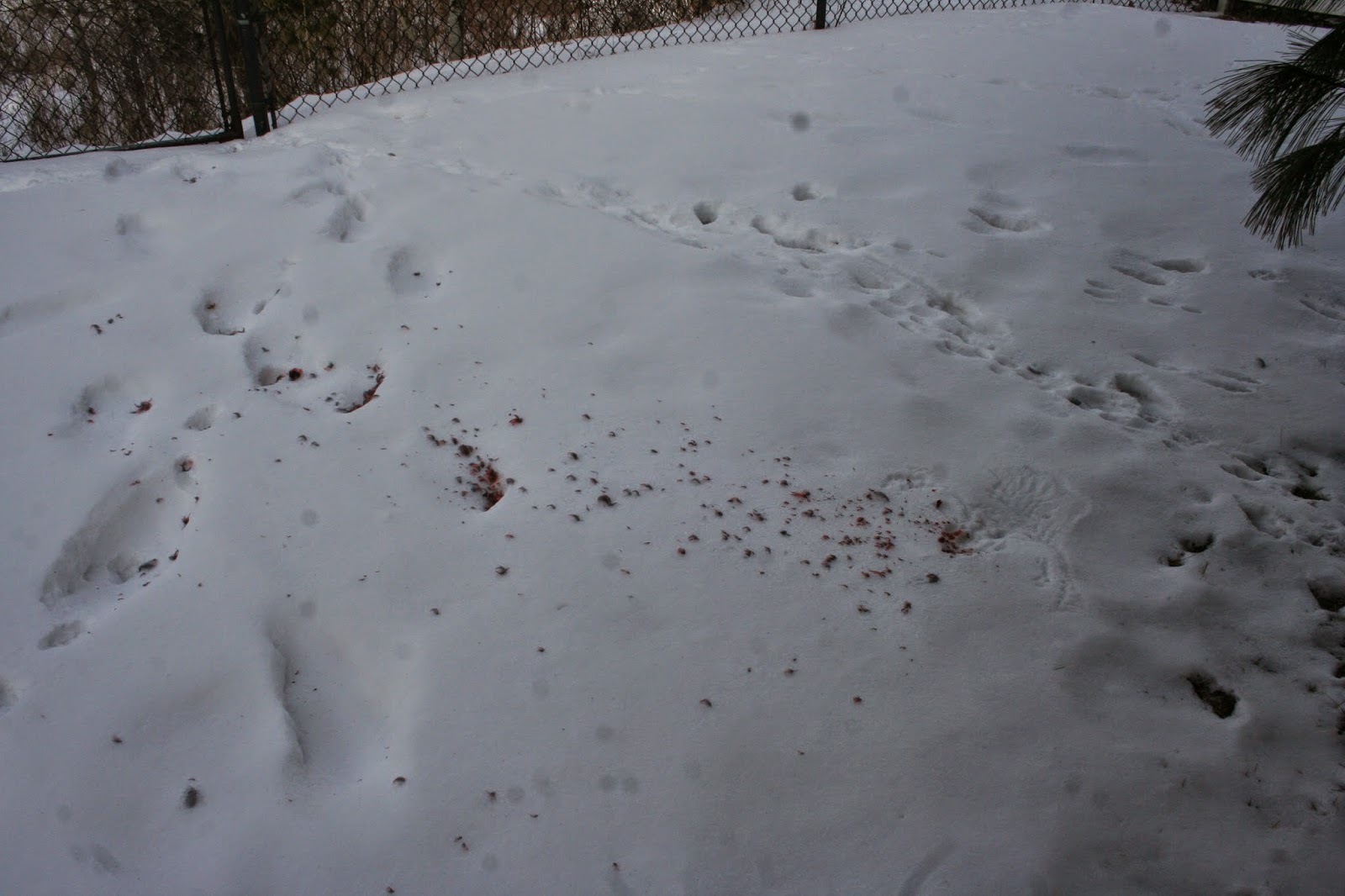 That's a lot of small feathers spread in a sort of pattern.  About a third from the bottom, on the right side, you can see a strike pattern (and above and to the right, the pine tree).
Here's a closer view of the pattern: 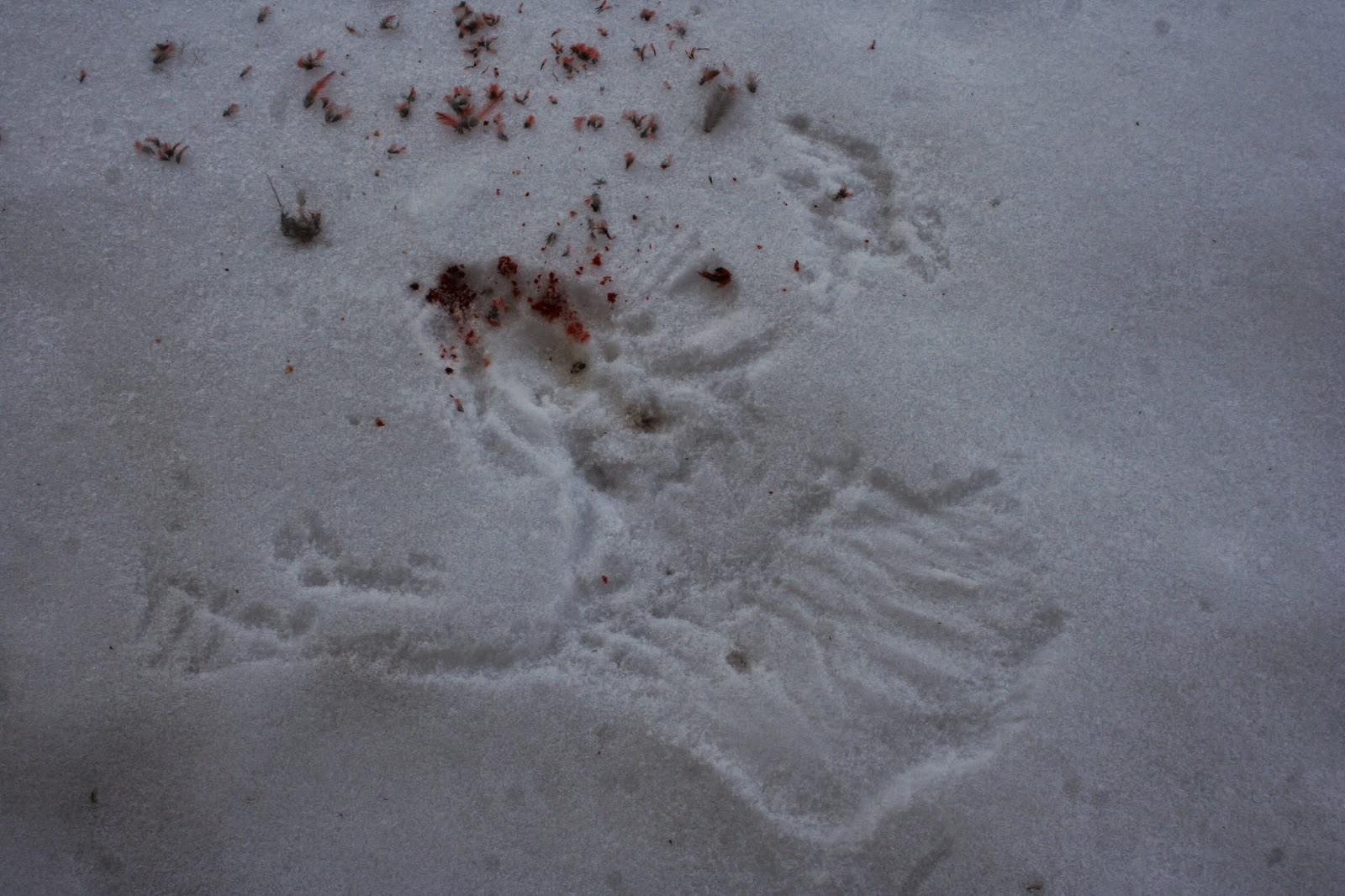 I think what we have here, is, the deepish area about a third from the top, left of center, with the heavy concentration of small feathers, is where the talons hit with the prey bird (a Cardinal is my guess, from how red the feathers are).  Diagonally, on either side, are where wing feathers hit, and on the lower right, is where the tail feathers hit.  My guess is that the Hawk took off from the birch, through the Pine, where the Cardinal was hanging out, and hit the Cardinal going down, hit the ground, and took off, all in probably the time of my heartbeat.

I've never seen a Sharp-shinned near my yard before.  I occasionally see Red-tailed Hawks soaring up above.  And last year, I heard a thump outside and saw a Shrike with a junco on the snowy deck, which then took off before I even thought of grabbing the camera.

Exciting times in the yard!

I had a bit of help this morning investigating; my neighbor's dog is visiting, and was quite intrigued by the smells. 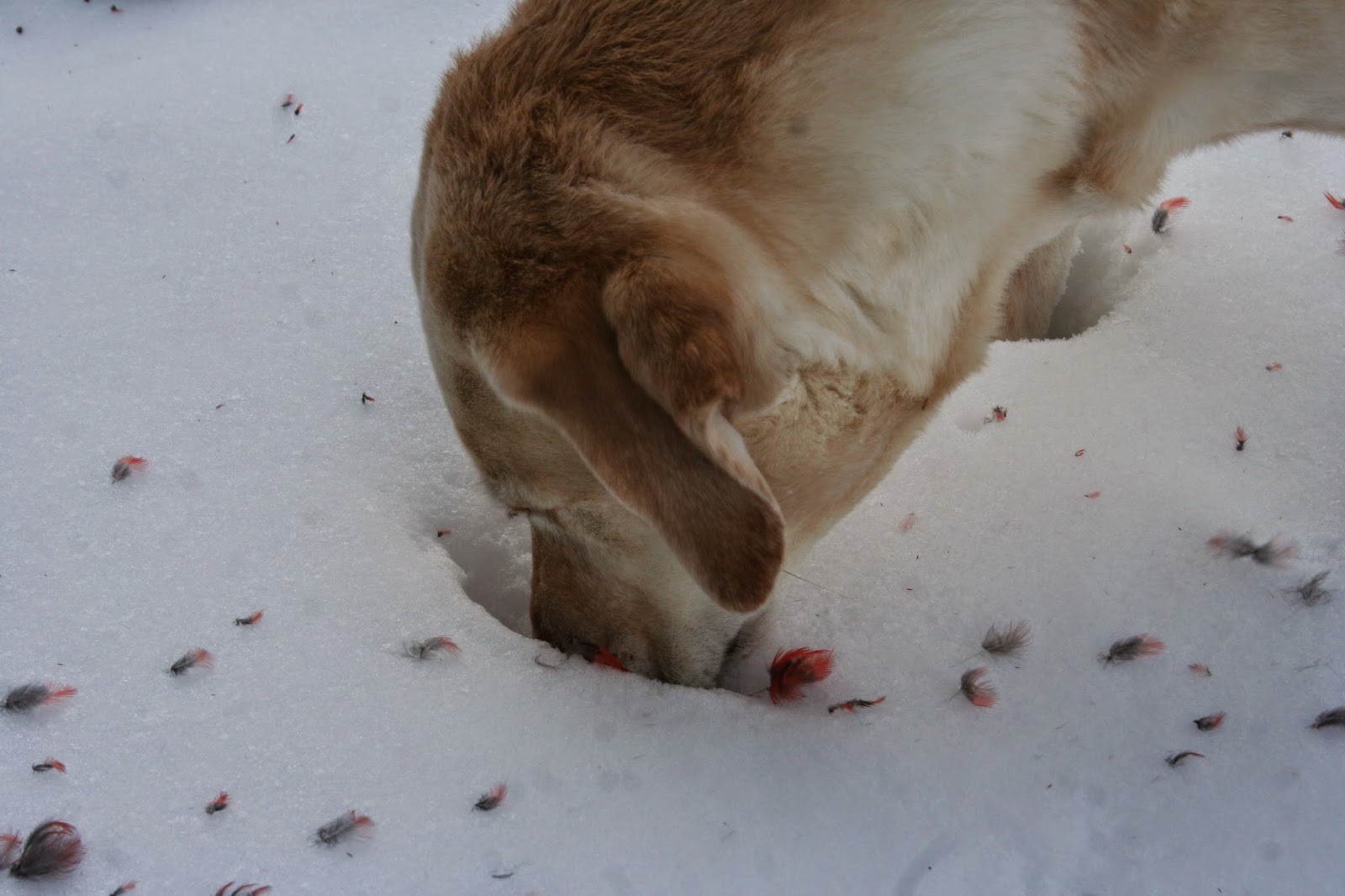