I went out for a ﻿drive the other day, to bird, and to just get out.   I didn't see many birds, but I did see a few eagles on the big river. 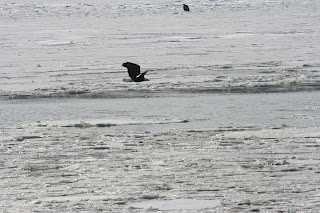 And even took a few pictures.

But I took a couple of side roads, just to see, and here's what I saw: 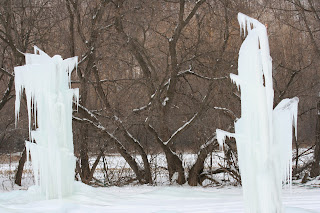 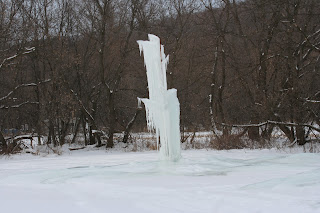 I don't know what these are.  I think they're either a tree or some sort of skeletal structure with ice formed when someone has sprayed them with water repeatedly.  Weirdness.

In other news, Lance Armstrong is supposedly considering fessing up in hopes of getting a suspension rather than a ban from competing in Olympic sports (which are sanctioned by the Olympic Committee, WADA and such, I guess) and making a deal to avoid perjury charges.  I meanly hope they don't make a deal with him.  He's banned now, and being sued by some folks.  I don't much care about the competition part, but I don't think people should be able to just get away with perjury, I guess.  I don't really see a benefit for any sporting or cycling orgnization or whatever, unless one of the peole who put themselves on the line thinks that a confession will prove that they were right.   (Here's a link that sets out the issues, from Velonation.)