Some of you may remember the last time I made a foray into shoe blogging. (More on that purchase a bit later.)

Well, once again, I'm there. I totally blew my shoe budget for a bit.

One of the sports shops in the next town north has a rather famous swap sale every fall for winter ski stuff. I bought basic classic style cross country skis at the shop a couple of winters ago now, and have been enjoying them a lot when there's snow on the ground. I'm not at all good, but I get out and get some fresh air, often in the company of one or another friend, and I get some exercise. These are things much to be desired, especially in the midst of winter.

Since I'm now in their customer database, I got a postcard about the swap last week. The swap started on Saturday, so one of my friends (let's call her S) went with me to see what we could find. 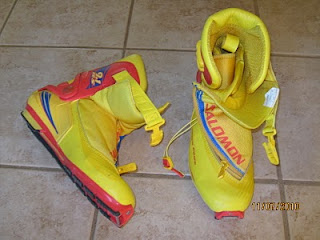 You may be thinking, but B, you already have skis and boots, don't you? Why would you get another pair of boots?

Ahh, well, I do already have classic skis and boots, but these are boots for skate skis! Yes, I'm going to try skate skiing some this winter. I tried it once with a friend's skis (and some rental boots), and it was HARD. But if I try some more, maybe I will enjoy that as a change up or in places that are groomed for skate skiing but not for classic skiing?

And, you see, they're yellow. That means I'll be WAY faster than my friend whose boots are orange. Because yellow boots are faster, right?

Now before you scroll down to see the skis, well, I didn't get skis. The swap had only a few pairs of skate skis, and none were right for me. (What counts as right for a given skier, on the most basic level, involes the person's weight and height. One of my biking friends is one of the ski club folks who contributes time to the swap to help people, and she helped me look at the skis and suggested I not get any that were there. We also consulted with one of the shop workers, and he agreed that I wouldn't have nearly as much fun on those as I would on skis that were a good fit for me. So I'll either have to go look for other used skis or buy new ones. But the bindings on these shoes are very much in line with standard skate ski bindings, so that shouldn't be a problem.)

You can, however, scroll down to see my other new shoes! 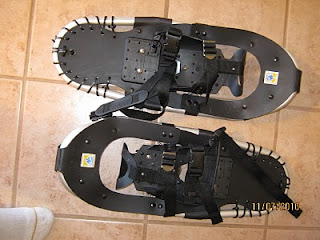 Lookee! I found a pair of used snow shoes. I've learned that it's way fun to have a friend go snow shoeing with me, but not everyone has snow shoes. But they're not the sort of thing that requires a precise fit for a basic walk, and they're not so expensive that having an extra pair around would cause my precipitous bankruptcy, so I got this extra pair.

Then S had an idea about going for a run. S runs. And she uses the R word. But I figure, S knows how slowly I run, and how whussy I am, so if S suggests going for a run together, it means she's happy to have my company knowing my limitations. I figure it's like when I invite one of my friends to go biking who doesn't bike as fast as I do; I'm inviting them because I enjoy their company and I'm happy to bike with them.

There's a new park being worked on in our city area; the city is in the process of taking out some trees for ski and snowshoe and bike trails, and S wanted to explore it a bit. So off we went. Remember my fivefingers happy toes? Well, the cleared parts of this trail were pretty lovely soft dirt, and it was GREAT playing! It's not like I burned up the trail, but I mostly ran for 40 minutes and was happy (we walked on the uphill parts) and felt good.

And this is going to be one glorious park. We went up one hill, and found ourselves on an area above a river, and it was beautiful to see through the fall trees out over the area.

And now I'm excited at the thought of snowshoing up there, too!
Posted by Bardiac at 8:59 AM