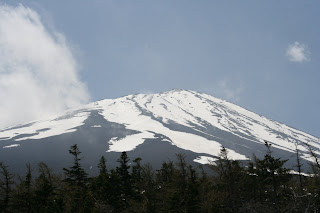 On the last trip before I left Japan, we visited Mt. Fuji, which was, as you'd expect, cool. As you might not expect, given the season, we actually SAW the mountain pretty well. This well, in fact.

There was still snow on the ground at the place where our bus stopped, a sort of half-way point from which many walkers start. But I don't think the mountain was open yet, and there was still a little snow around even where we were.

I also saw this: 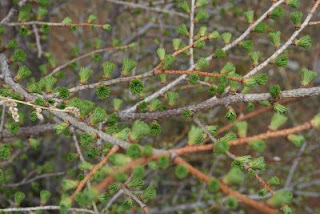 You're probably thinking that it's a plant. And you're right. More specifically, it's a Larch (related to the Larch or Tamarack we have up in the upper midwest). Imagine my delight to see Larch trees, lots of them, up there on Mt. Fuji!

I've been taught to think of Larch/Tamarack (I think of them as Tamaracks because that's the name I learned first) as bog trees, but I've since been told that even the American Tamarack does okay in different areas, it just can't outcompete pines and other stuff in most areas in the American range. So it wins in bogs. But on Fuji, the Larches were everywhere, and in late May, just starting to green up.

When I first moved to the Northwoods, I bought a house with a Tamarack in the back. It was August when I moved in, and I liked the soft needles, which were a little different from the pines and spruces around. But then in September/October, my tree turned yellow, and I freaked out and thought I'd somehow managed to kill it off! I was worrying out loud about it in the office one day when one of my colleagues asked if it wasn't a Tamarack, and then told me about Tamaracks turning yellow and losing their needles. So that was my introduction to Tamaracks. The best part of Tamaracks is greening up in spring; they get these little bud things, and then gradually the needles start poking out. They only get an inch or two long, but they're a wonderful green, and I love watching them get started.

They're probably my second favorite tree (and my favorite doesn't grow around here), so imagine my joy when I saw all of those Larches up on Mt. Fuji!
Posted by Bardiac at 11:36 AM