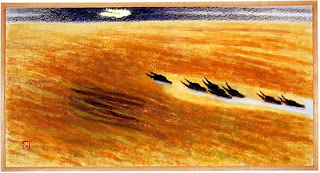 I went out today with a friend, first to a shrine, and then to the Kyoto National Museum of Modern Art for an exhibit of the works of AKINO Fuku. (I've learned that you can put Japanese names in either first name/surname, or surname/first name order, without confusing Japanese people. But for us westerners, using all capitals helps us recognize the family name.)

She was really amazing, it seems. After establishing a career as an artist and teacher, in her 50s, she visited India as a visiting professor, and thereafter was deeply influenced by Indian art, culture, and landscape in her paintings. She also visited Afghanistan, Cambodia (these are the places I saw mentioned in the exhibit), and painted in response to her travels.

This picture is called "River Crossing." It's a little hard to see on a screen, but the black bits are the heads of buffalo, swimming across a river from left to right. The pointy black bits are their horns. Once you see it, it's just amazing.

I bought a small print of another buffalo picture, but I can't find it on the web to show you. As my friend said, it will make a memory for me. It will indeed.

One of the things I really liked about Akino was that she seemed to have studied every sort of western art you could think of, from those medieval bronze grave markers that people like to do rubbings of to Picasso, and she could bring what she studied in, and make it work with Japanese traditional art, and then with Indian influences. Her pictures don't look the same at all, but you can sometimes see connections between the pieces at the exhibit. For example, there's a series of studies of nude figures, mostly showing form and a sort of bold outline approach (I'm not doing these justice at all, sorry). And then in a later painting, a shadow figure which could almost have stepped out of the study series. But it was just set at the edge of another scene, and fit there perfectly.

The day was as perfect as one could wish.
Posted by Bardiac at 6:45 AM