On Sunday morning, I left my hotel after the breakfast, and took my bag to the Left Luggage at the train station before getting on the Tube and heading to Trafalgar Square.  I had 10 am tickets to "The Encounter: Drawings from Leonardo to Rembrandt" (that link will probably go dead when the show ends, alas).  But since it was only 9, I started wandering, and saw that St. Martin's-in-the-Fields was open, and people were going in and out.

So I went in and took a seat in one of the rear pews.  When I was in London before, I'd visited, but hadn't been able to go in the main building, just the lower area, the Crypt, where they have a café.  They were getting ready for a service at 10am, and people were about, very friendly, and didn't seem to mind my sitting quietly.  What a glorious building!  It's got to be one of the most beautiful spaces to just sit quietly (like the Banqueting Hall).

There was a family with two toddlers doing a practice run for baptism with a priest; they were all quite adorable.

And then the organ started in, and the choir started practicing, and it was glorious!  I wished I'd had time to stay for the service.

But I left about 15 minutes before, bought and downed a bottle of water, and went to the National Portrait Gallery.  So fun.  The drawing exhibit was marvelous.  And I learned that they can tell from the cross-hatching that Holbein was left handed.  So that's very cool.

As you'd guess, I left there, got a sandwich to go, and went off to the Globe matinee of Much Ado About Nothing.  It was Mexican themed, set in maybe the last part of the 19th century, with a wooden freight car as the backdrop. 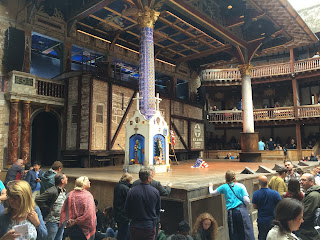 That was an interesting idea, but I never quite got the why of it.  Beatrice was superb, Benedick almost as good, and overall, very fun.  They played Dogberry as a US film maker, but with an uneven accent, and some changes that didn't quite work for me.

Still, all in all, well worth the visit!

This time, I sat in the lower gallery, and it was very good except that when they showed the film bits, I couldn't see because of the pillar.  Oops!