In the annals of visits to new places, on Sunday I joined the school trip to Bletchley Park.  It sounds interesting and cool when you read about it, but in person, it's way better!

Bletchley doesn't sound like the sort of place with lots of scenery pictures, but it's beautiful.  If I lived near, I'd get a year pass just to picnic on the grounds regularly.  They've got lots of comfortable looking seating around the grassy area, and it looks very inviting.

Alas, I only had a few hours, so I didn't stop to sit down except for a quick bite to eat.

First up is the manor house.  It's very beautiful inside, and there are displays about the work done at Bletchley and the people who did the work.  They seem to focus a lot in the manor on the recreational side of things, while other areas focus more on the work. 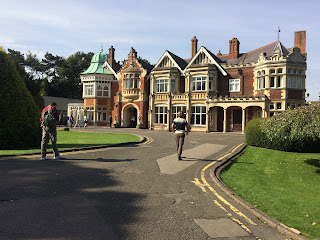 This is the back of a "Bombe" machine, designed by Alan Turing.  It's an electro-mechanical machine that sorts through codes using probabilities.  Here's the basic idea:  the British intercepted lots of Morse code radio messages.  Once they'd figured out the rotor system that the German Enigma machine was using (which they started with a good idea about since Enigma machines were initially patented as business machines for sending coded business messages, so several countries had bought them to work with), and they knew that a lot of messages sent out were basic information, weather, supplies and such.  If they could pick out a message that was likely to be, say, weather, that would usually have specific words in it, then they'd enter the code into the Bombe, and it would use probability to suggest one or more settings that the Enigma codes were using that day.  (They changed daily.)  Then they'd test those, and if one worked, they knew the code settings for the day, and could punch in code and come back with the message.  Well, they'd get a version of the message, because nothing was going to be said in full or spelled out, of course. 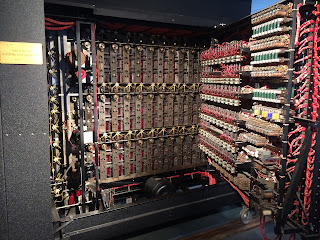 And this is the front of the Bombe, where the women (mostly women, evidently) who ran the tests input the messages. 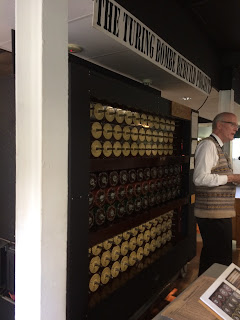 This is an Enigma machine.  There are three rotors near the top (there's a little open lid that could be closed over them).  The rotors have the alphabet.  There were five rotors to choose from, each with 26 letters.  Three rotors were chosen each day, in a specific order, with specific settings.  So that gets difficult!  Once the rotors were in and settings done, the coder entered a letter on the keyboard, and then a different letter lit up on the upper panel.  And the coder would write that letter down, and then enter the next one.  The coded letters were given to a radio operator who used Morse Code to transmit the information.  At the other end, someone with an Enigma machine and the rotor and setting information did the same process, entering the coded letters and coming out with the message. 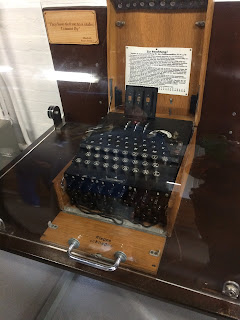 The next one is a Lorenz machine, which was the German next step in code making, and way, way more complicated. 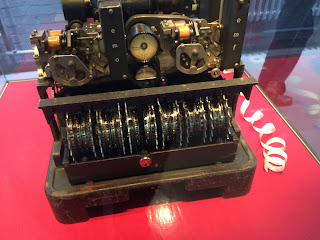 These are the boring looking buildings where the probably very boring work of day in, day out trying to figure out the codes and translate them into meaningful information happened. 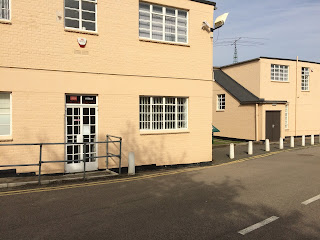 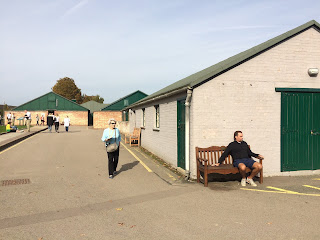 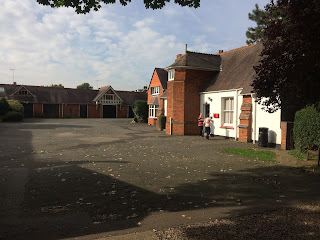 A memorial to Polish codebreakers.  From what the tour guide said, Poland had been really advanced in mathematics and codebreaking before the war, and had shared a lot of information with France and Britain, and that information probably saved tons and tons of time in breaking codes once the war started. 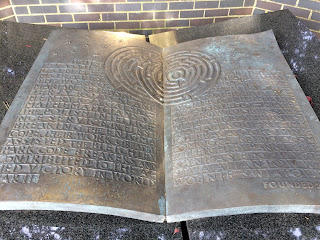 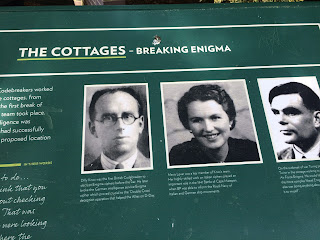 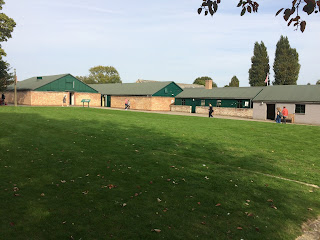 All in all, I could have spent probably 8 or more hours here happily exploring.  I think we were here for just about 4, so good, but there's so very much to see and learn!
Posted by Bardiac at 12:47 PM