9 September: London for "The First Playhouse in Drury Lane: a Symposium on the Cockpit-Phoenix"

Last Saturday, I went with a colleague here to a symposium, "The First Playhouse in Drury Lane: a Symposium on the Cockpit-Phoenix" at the London Metropolitan Archives.  It was really interesting, fun, and I learned a lot.

One of the most interesting papers for me (because I learned a lot) was Christopher Matusiak's paper on "The Cockpit at War, 1642-1656."  (I may not have the title precisely, because I was taking notes and am reading from them, and not an official document.)

Matusiak argued that despite legislation against theaters/plays, four houses played through to 1649.  According to my notes, these were the Cockpit, Salisbury Court, the Fortune, and the Red Bull.  Even after 1649, three more carried on playing.

[Am I the only one who didn't know that some companies kept playing after 1642???]

According to Matusiak, the companied argued against the validity of the Parliament's ordinances against theaters/playing, since they weren't Acts, since they hadn't been signed by the monarch.  That's interesting, no?

Another really interesting paper was Stephen Watkins' paper on "Davenant at the Cockpit."  Watkins argued that from 1658-9, Davenant performed three works at the Cockpit, The Siege of Rhodes, The Cruelty of the Spaniards in Peru, and The History of Sir Francis Drake.  From what Watkins said, these were sort of opera pieces, with music, and recitatif, rather than what we traditionally think of as plays.  So they may have avoided trouble by not performing plays that were proscribed, but something else.  Watkins pointed out that since the Protectorate was at war with Spain in the 1650s, there might have been a more relaxed attitude towards these performances because of their subject matter.

The Siege of Rhodes had the first legal female actor on the London stage.  And not using cross-dressed boy actors may have made the morality thing less of an issue.  Interesting stuff, for sure!

In my notes about the paper, I wrote "Ballad-vs-Dav[enant]'s play [line break] John Evelyn [line break] 6 May 1659 --> didn't like play."  So either John Evelyn wrote a ballad, or maybe wrote about a ballad and that expressed dislike of the performance.  In either case, it would be evidence that there was a performance.

After the symposium, my colleague and I went to visit the approximate location of the Red Bull, near Haywood's Place now. 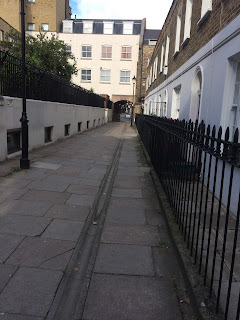 We also stopped to see what's left of the well at Clerkenwell, which is weirdly behind a big glass window in an office building. 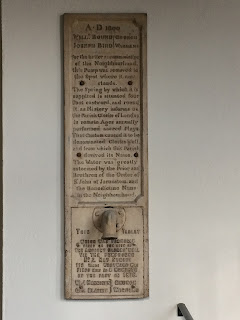 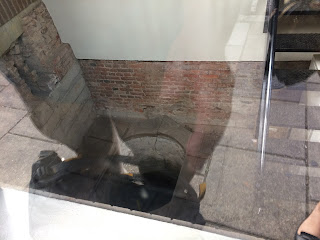