Catching Up: London, The Globe, National Portrait Gallery, Part One

On Saturday morning (3 September), I went into London..  I had time, so dropped my bag at my hotel and then took the tube to Temple.  I got off and had a nice walk to the Millenial Bridge, across, adn then saw King Lear (matinee) at the Globe. 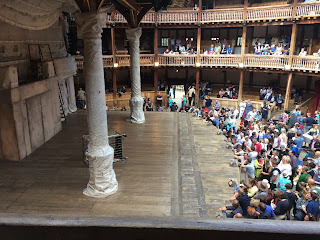 It was a sort of post-modern production, starting when the actors walked on in modern dress, carrying bags and such through the audience.  The move to "hey, let's put on a play" wasn't quite clear to me, but then the play was, and it was really interesting and good.  I thought Gloucester was really effective, and Edmund, but found the Fool and Edgar less, ummm, satisfying?

And I didn't really cry at the end (I cry quite easily at plays and such, so I guess I wasn't super caught up in it).

When I went to the Globe back in 2011, I was only able to get standing tickets.  This time, a bit more experienced in buying tickets, I bought mine when I found out I'd be coming, so I got to sit.  The first play I sat in the middle gallery, and it was really good.  I had good sight lines and could hear well.

After the play, I went to Southwark Cathedral to visit some dead folks. 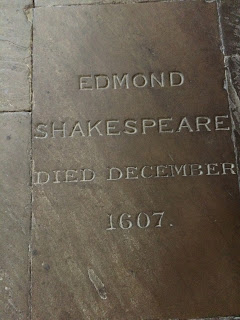 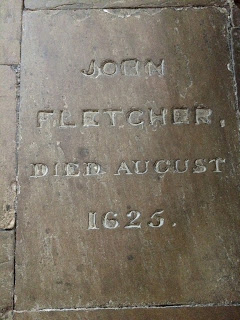 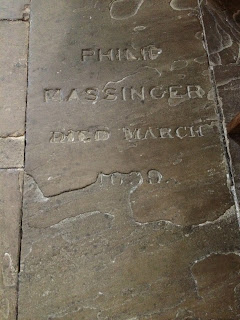 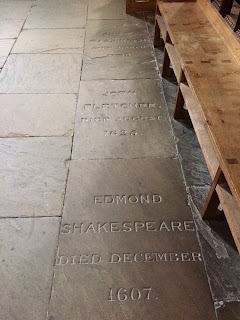 I also visited Gower and Lancelot Andrewes again, as one does.

That done, I walked along the Thames and enjoyed the festival atmosphere.  I crossed again at Tower Bridge, and walked a bit around the Tower (outside, sine it was closed by then), took the tube, and got dinner before going to bed at the hotel.
Posted by Bardiac at 3:59 AM