Before I went to Yellowstone, I stayed with a friend in Montana for a few days. She took me out to the First People's Buffalo Jump State Park, a sort of mini-butte area where Native Americans from different tribes could hunt bison by "pushing" them off a smallish cliff.

In an effort to help myself get used to the altitude (about two thirds that of Yellowstone), I took a little walk up the park, and my friend went to pick up one of her sons and then picked me up at the top.

Along the path, which was nicely tended, there are these information placard things. You can see one a bit in the distance in this picture, right here. See it? 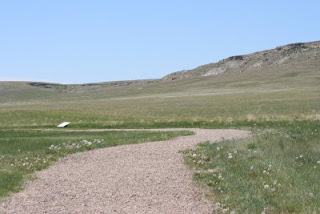 As I was walking up, maybe thirty feet away, I saw something move under one of the placards. Now, I try to be at least minimally aware of movement around me, especially in an area where there might be snakes, especially rattlesnakes, because I sure don't want to step on one or put my hand up next to one. It's not like they'll be out hunting me; I'm way too big to be prey for anything but a big constrictor-type snake, and they aren't around Montana so far as I know. But still, I try to be aware. So I walked closer, determined to give it a nice wide berth (there was plenty of room to walk safely away on the trail).

And then I realized, the movement was a head, and a head WAY too big to be any rattlesnake that would be there, and besides, a rattlesnake would be sunning, and not hanging out in the shade, right?

That's no rattlesnake! That's a baby Pronghorn Antelope, doing it's Obi-Wan "You don't see me; this is not the prey you want" thing, lying very still, barely moving its head to watch me as I walk along.

I skirted around, as far away as I could while staying on the trail. 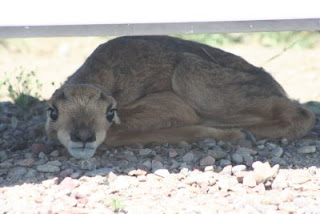 I'd seen an adult-looking Pronghorn as I started out, but there was no adult in sight, and I sure didn't want to scare this little guy if I could help it. (These are taken with my zoom lens, so they look closer than they really are.)

How's that for a fantastic encounter?

My friend also took me out to Benton Lake Wildlife Refuge, where we drove around slowly, trying to avoid being prey for ravenous mosquitos while looking at lots and lots of amazing birds. I did my best to engage my friend in my nefarious plot to take over the world with people looking at birds and playing bikes. (But I didn't take any pictures because the mosquitoes were just too thick and unpleasant, and I'm a total whuss.)

We saw, among other things, Northern Shovelers, Wilson's Phalarope, Cinnamon Teal, Ruddy Duck, Hooded Merganser, Common Tern, Marbled Godwit, and Killdeer. I really got a chance to see more Phalarope and Godwits than I ever have, which helped me gain a little confidence in identifying them.

Finally, I biked a little along the Missouri River, on the wonderful River's Edge Trail. It was a short ride (15m), but gave me a little more confidence about riding at a higher altitude.