My bike tour started in Bozeman, so I headed there the day before, and the Roaringgrrl came to meet me! It was great to meet her and her pal, J. And she came up before taking off on her own cross-country trip (even longer than mine!). They also took me to lunch at a great restaurant.

Then the biking started. You've read about that. It was great, despite some rain. But we didn't see as many critters as I'd hoped. Here's some we did see: 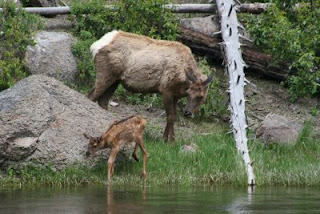 That's a couple of elk. They seem a whole lot bigger when they're not behind a fence up here in the Northwoods being ranched!

I saw a few elk, but no others nearly so close as these. 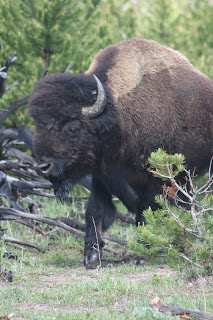 I also saw a number of bison, some fairly close up. You'd think I'd have taken a dozen pictures, right? The thing is, on a bike, the first thing on my mind when I see a bison on the road is to get out of its way. Our guides told us that getting on the far side of a car was a good idea, so that's what I did instead of taking pictures. (This is a picture I took later, NOT on my bike.) The good news is that I didn't get stomped by any of the bison I saw.

Mostly, I didn't see a lot of wildlife while I was biking. I saw trees, and the road, and lots of scenery. I had a small camera with me, but my binoculars and big camera were in the van (I pulled them out for the elk, though). The small camera was fine for basic pictures, though. 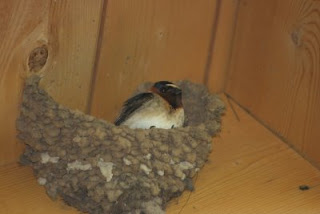 At our final hotel, a bit outside the park (Chico Hot Springs)did give me an opportunity for one wildlife close-up. This is a Cliff Swallow hanging out on a nest. I wasn't nearly as worried about this guy stomping me :)

And finally, on the last day of riding, we saw an Osprey nest right close to the road, complete with an Osprey who took off and flew around while we hung out on the other side of the road watching. So this is a picture I took with my smaller camera. 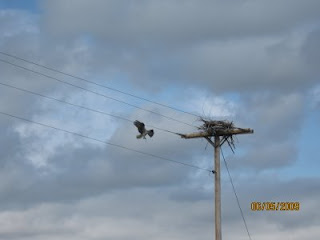 As you can see, it's a lot less telescopic than with my bigger camera, but if you right click to embiggen, you can still see that there's a bird there.

So that's the bike trip wildlife. Tomorrow, I'll show you some of the pics I took driving around through the Lamar Valley.
Posted by Bardiac at 5:07 AM