After leaving Yellowstone, I headed out towards Cody, WY. I'd heard there's a great Buffalo Bill museum there. What I didn't know was that there was also a small mountain range, and it was fairly socked over with fog, so it took me a whole lot longer to get to Cody than I'd planned, so I was too late for a museum. But it was about 6pm, and was going to be light until about 9pm, so I decided to go on to Sheridan. And what I also didn't realize was that the Bighorn range was between me and Sheridan, and was also pretty socked in with fog. 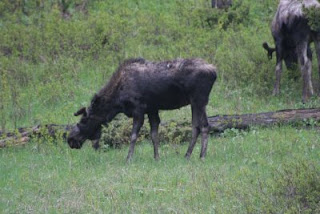 Before I hit the fog, though, I saw a couple of moose, looking like they were working on a set of antlers.

I hate driving in a heavy fog. I'm reasonably decent at it, because I'm willing to drive really slowly, but it's stressful. 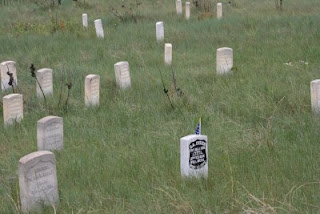 Happily, the next day was a tad rainy, but I seem to have escaped the fog and found my way to the Little Bighorn Battlefield National Monument. They've marked where the soldiers died with white markers; Custer's is specially marked. And they've recently added markers for the Native American warriors who fell, too. It's really sad to realize how willing people were to die to take over the territories of Native Americans. And yet, I'm guilty of not wanting to move back to whichever parts of Europe my ancestors came over from. Still, the battlefield is overwhelmingly sad with all the markers around. 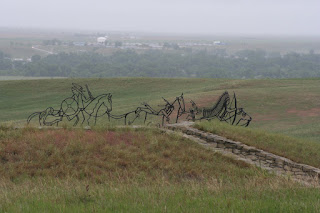 They've also added the most beautiful Native American memorial with a theme of Peace through Unity. It's this sort of mound thing, but hollow, so you can walk on the path in, and there are listed the names of Native Americans who died in the battles in the area. It's very moving. And above, the mound is this incredible sculpture that looks almost like stained glass against the background. 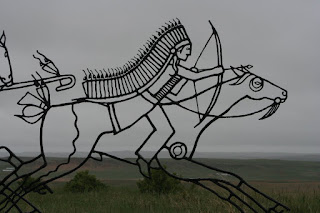 Here's a series of closeups moving from right to left, from the front of the line of horses to the last. I should have gone back to my car to get the non-telephoto lens so I could take the whole group in a single shot with the sky behind it. Alas, I didn't. 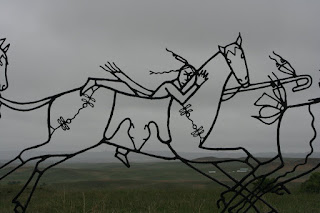 Still, these shots give you some idea of how beautiful the sculpture is. I was struck by the final figures, where you can see a woman reaching up to the man on the horse, maybe handing him something? 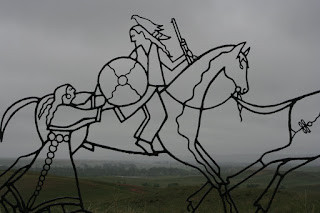 The museum down below talks about the women who were camped nearby, and who were attacked by the cavalry soldiers. It's one of the few mentions of women (except for Custer's wife, who donated a bunch of his stuff, some of which is displayed at the museum, too) at the battlefield site. 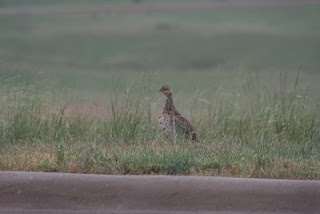 Before I left, I drove up the road a bit, and saw some birds. Yes, you knew it would have to end with some birds, didn't you? These are my very first Sharp-tailed Grouse. I've never seen grouse of any sort before, so I was pretty excited. There were a bunch of them, but I only noticed one at first, and then it took me a while to notice the others.

Next up, a few thoughts on the books I listened to while driving.
Posted by Bardiac at 6:27 PM