Guy Fawkes, guy, t'was his intent
To blow up king and parliament.
Three score barrels were laid below
To prove old England's overthrow.

And what shall we do with him?
Burn him!   (Source)

We had a bonfire here at the Abbey.

Here's a very short video.  I tried to get the full moon and the blue flame coming up on the lower left side.  I don't know what burned to make that color, but it was beautiful. 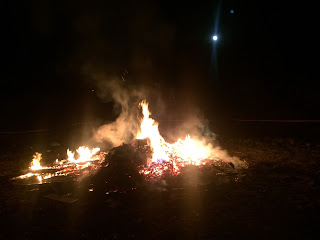 And here's a regular picture, showing our fire and the whole moon.  I went down a little late, so didn't get the fire at it's full glory, but it's probably close to 20 feet wide.  The garden staff keep garden waste, and build it with the woody stuff, but then other things get put on, including some chicken wire sculptures from an art class (the teacher gave the students the decision about what was to happen to their sculptures and this is what they chose).