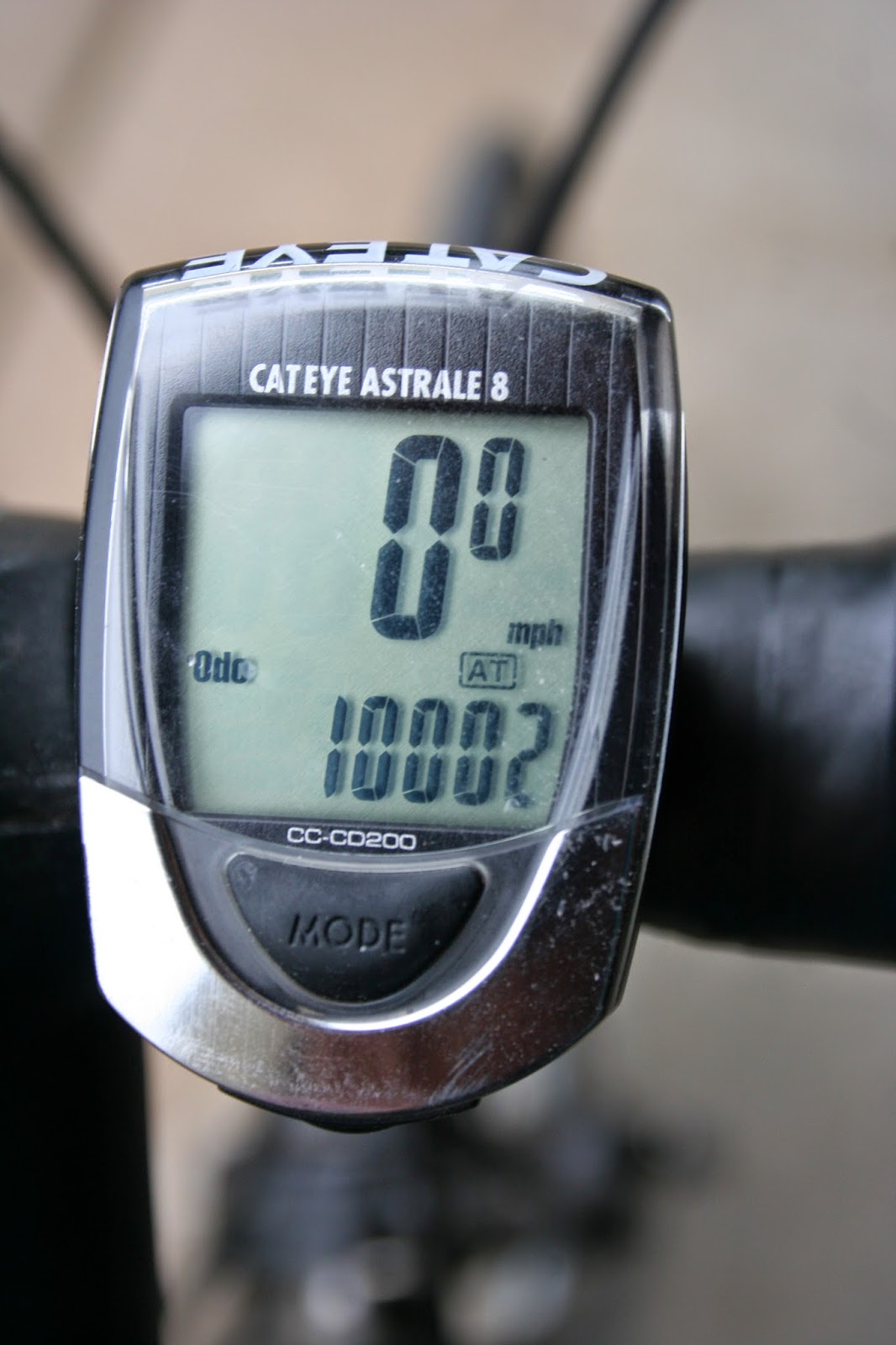 Yes, real riders ride that in a season.  Still, those have been ten thousand mostly really good miles.

There's a biggish bike race in the area, with both men's and women's pro races, so I left my house early and drove a while.  I wasn't sure how timing would go, but I wanted to be at the first sprint point before the men's race went through.   The sprint point is about 20 miles from the start, and the men started at noon, and the women at 1:30, so figuring 30 miles an hour, I wanted to be at the sprint point by 12:40.  Of course, as I was planning this, I was thinking of the Dauphine, Tour, Giro, Vuelta, etc.  Big crowds, lots of screaming.

I'd scoped out some maps, and figured out that about 15 miles from the sprint point town is a town that's an endpoint of a bike trail, one of those rails to trails things.  So my plan was, if I got to the area early, I'd stop there and go for a ride, figuring the time ahead, and then go to the town with the sprint point.  And then between the men's and women's races going through the sprint point, I could also take a short ride if I wanted.  And that's how it worked out.

I stopped at the trailhead, and figured if I rode for 40 minutes (thinking 20 out, 20 back), then I could hop in the car, drive to the town with the sprint point in time to park, find my way, and so on.  I only rode just over 9 miles there, but it was beautiful, not windy, and quiet, and relaxing, with flowers, birds, and me riding along.  The day was slightly overcast, and just a perfect temperature for riding.

Along the way, I passed by a guy sitting on the ground next to a TT bike, a beautiful Felt.  Naturally, I slowed to check to make sure he was okay, and he said he was, just had two flats and was waiting for his friend to pick him up with a car.  He said the path got really bad ahead, and he'd had two flats.

I turned around maybe five minutes later (at the end of my 20 minutes out), and saw him again and checked to make sure he was okay.  I told him my plans to go see the race, and commiserated on the flats, and asked him what tires he was using (because I carry a 25mm tube, and would have shared, but I don't know if it would work on 23 or 27 mm tires).  But he said he didn't know, just whatever the bike came with; he'd just been set up on it.

What a bummer is that?  Brand new bike and two flats on what has to be a pretty early ride?  BUMMER!

But also, isn't it weird that someone who does triathlons (he said so, when I told him I thought his bike was beautiful, which it is) doesn't know what sort of tires they're rolling?  (I'm not nearly as geeky as to own a TT bike, and I know I'm riding 25mm Gatorskins.)

But anyway, he was hanging out waiting, and not hurt or anything, so I went on my way.

I got to the small town where the sprint point was.

Luckily, there was someone in a yellow vest, looking vaguely official, so I asked and he just waved at the street and said to park wherever, just out of the traffic lanes.  So I did, just a bit past where he was (near a bar and grill, and near an open tent with stuffs happening).  As I drove past, I saw a sign marked "Sprint 200 m," so I drove 200 meters, and there was a little sign saying "sprint" and a little line across the road.

I parked and walked back to the bar, bought a diet coke, used the restroom, and went back out to talk to the yellow vest guy, who said that he expected the men's race to come through in 15 minutes or so.  (I was earlier than I'd expected, since it didn't take long to get from the trailhead to the town.)

So I went and waited on some steps leading to a wedding chapel right in front of the sprint point and relaxed with my coke.  After a while, a car drove up, parked off the road, and two judges (with official looking judges' shirts on) and another yellow vest guy got out, and the yellow vest guy put out two traffic cones on either side of the road at the sprint point.  And then we all waited.

And after a few minutes, the official cars came through, and then ZOOM, the race went buy, all nearly in a bunch, with a little stringing out in front so that one guy won the sprint fairly obviously.  And then the rest of the cars went by, with a couple of straggling bikers.

I cheered for all of them, from the first to the last, though I felt silly because it was only me, and the two judges, and the yellow vest guy, and they weren't cheering.

The excitement ended at 12:50 or so, which meant the men had taken 50 minutes to ride the 20 miles, and they were all bunched.  The women's race was due to start at 1:30, and then I figured it would take them a bit longer, but at least 50 minutes to get to the sprint point, so I had an hour and a half to do what I wanted.  And what I wanted was to bike some more.

So I got on my bike and headed out riding the race route backwards.  I had 7 miles to make the 10K on my odometer, so I knew I wanted to ride at least 3 and a half miles out.  And I figured I was starting at 1, and needed to be back by about 2:20 (but if for some reason I weren't, I'd just cheer from the side of the road where I was, but so long as I was back, I'd be able to put my bike away and such).  And off I went.

So I rode to 1:30, and I'd gone about 4 miles, and I decided if my legs were just that bad, I'd turn around and go back, and that would be fine.  So I turned around.

And suddenly, I was seriously flying.  The headwind was now a tailwind.  So when I hit the 10K on my odometer, I was going down a very slight hill at 24 miles an hour, feeling more like a real biker, spinning at 90 rpm and grinning.  It took me maybe 10 minutes to make it back to town, maybe a little more, but the whole time, that tailwind was helping a lot.  So I went a bit beyond the sprint point, and up a little hill, past a different yellow vest guy, who cheered for me, which totally made me laugh.

I rode back in, changed clothes in my car in the parking lot of a little park (out of the way, and not highly visible to anyone), went to the tent thing, which was a benefit to raise money for a scholarship thing for folks studying to be EMTs and such, made a donation and got a pulled pork sandwich, some baked beans, and some potato salad, and enjoyed my lunch.  I think most of the town was there, all in t-shirts to honor the young woman in whose name the benefit was being held, since she'd died several years earlier in a car accident.  (You can learn a lot in a small town if you ask politely and donate for a sandwich.)

Then I wandered back to the sprint point, and hung out until a new judge and yellow vest guy drove up, and then I cheered as a lone breakaway rider (#61) passed.  She was more than three minutes ahead (but with 50 more miles to go, that didn't seem likely to hold, or maybe?) and then the rest of the peloton came through, and I cheered for all of them.

And then I walked back to my car, and drove home quite happy with my day.
Posted by Bardiac at 3:15 PM